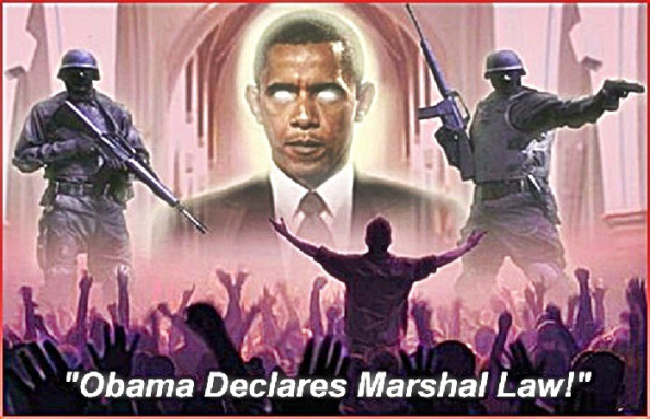 For years, Sean Hannity has called Obama a Kenyan secret Muslim who is out to destroy the constitution. Not far off from this, YouTube has warned us for years, that Obama was going to declare martial law; declare himself dictator and we would live in a military police state.

What is odd to me is that none of the people out there who believe these things – and there are a lot of them – know the following fact: earlier this year, President Obama enacted an Executive Order banning the sale of military gear to the police. What Obama was attempting to stop is something known as Program 1033 and if you want to know more about it, I wrote an article outlining this late last year: http://anonhq.com/program-1033-police-militarization/

Hillary Clinton has said she fully plans to continue President Obama’s executive action against police militarization. Donald Trump not only plans to overturn Obamas order, but has said that he is “going to make it easier for police to purchase the gear they need.” This means more militarized police and Trump also plans to “add more police officers” to the overall national police force.

So, where are all the conspiracy nerds on that one?

Before Richard Nixon brought shame on his country and was essentially impeached by Congress, Nixon declared a federal War on Drugs – and we still follow his administrations policy to this day. What are the results?

Since Nixon and his War on Drugs in 1971, there has been a 500% increase in arrests inside the United States and as recently as 2015, there were over 2.2 million people serving sentences in federal prisons – 70% of which are there for drug related charges. More recently, since 1994, when 100,000 police officers were added to the national police force, the number of incarcerated citizens inside the United States has doubled. Furthermore, the United States represents 5% of the worlds population, but nearly 20% of its prison population.

When we see the degradation of the relationship between police and society, I believe the reasons outlined above have led to, and are behind what we now see today.

I do not care about conspiracy theories and this article is definitely not written to boost Hillary Clinton – the law in 1994 mentioned above was Bill Clinton’s policy measure. Hiring tens of thousands of extra police and then giving them more military equipment to arrest a larger number of American citizens, is not the solution to our “police problems” in 2016.

I also do not believe police are the bad guys; more people seriously need to learn to stop acting so belligerently when police are on scene. If you haven’t clicked on my article about police militarization above, please do – it demonstrates why I say this.

What Donald Trump is proposing, as far as the police are concerned, is extremely dangerous. And that is the point of this article. Why aren’t more people talking about this?

This article (Police Militarization: Where are the Conspiracy Nerds on this One?) is a free and open source. You have permission to republish this article using a creative commons license with attribution to the author and AnonHQ. Join the conversations at www.anonboards.com.