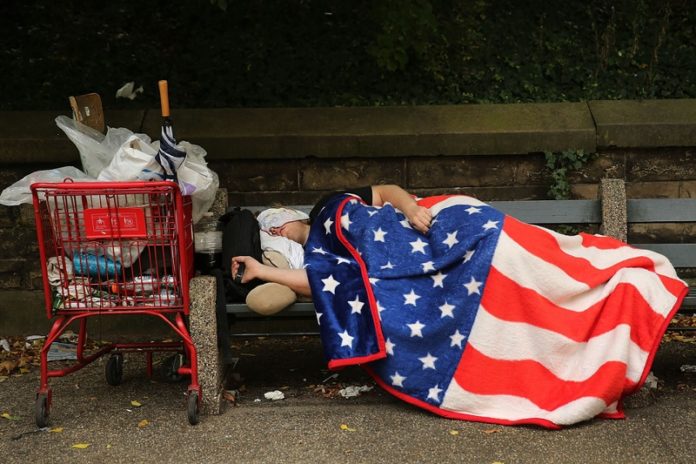 The story is the same where ever I went: Washington DC, cities of Canada, LA or Dallas, the story was the same with those I came into contact with. It was like the wash cycle; rinse, spin, repeat. For every person I spoke to on the streets, who were fortunate enough to be employed, they had five stories to tell about those they knew who weren’t. I was astounded that the great America that I had travelled to was in such a state. It was dismal. If you live in the United States, there is a good chance that you are now living in poverty or near poverty. Nearly 50 million Americans, (49.7 Million), are living below the poverty line, with 80% of the entire U.S. population living near poverty or below it.

The first person I came into contact with, and I’ll name him ‘B’ for privacy reasons, was a man with a huge heart, soul to match and was in the trade of helping strangers. He didn’t think twice when it came to helping myself in the streets of DC in the middle of the night, and it was then that we got to talking about his life in the great city.

‘B’ was from Somalia. He was a slight man in his mid-forties, well-spoken and worked hard to immigrate to America, expecting all the stories sold to him to be true. But here he was, parking cars for a living with a below minimal wage and surviving on mainly the tips he received. It was early winter, freezing that night, yet he stood outside on shift with some colleagues without a complaint. “I’m a lucky one,” he said. But I wondered how much of that line he believed when I looked at his damp shoes, listening to him speak about his permanent nightshift 7 nights a week. Upon our parting we hugged, grateful for our fleeting meeting to breakup our ordinary night. And as he walked me to my hotel, I wondered what would become of him in 12 months’ time. My second conversation was more a slap in the face at the reality as I exited D.C. in a cab, heading out for my flight to Canada. The man was in his sixties, well-spoken and obviously very well-read if not educated at university level. He knew about every topic from geo-politics to history and agriculture. He spoke about the unemployment and was grateful for his job. “So many are unemployed. They go to college, they get degrees and end up driving or unemployed…my daughter has just received her degree in accounting and economics, but no job…” he trailed off. My head spun. In my own country such a degree would eventually see someone living on a healthy wage in a great part of town.

It was a snippet of what I saw in my two week stay. With my eyes wide open, I hit the streets of a city in Canada where I was astounded by the number of homeless. One I spoke to on the street after giving him a twenty, told me he used to serve with the army, in Iraq. A vet on the streets; I wished him luck and with a heavy heart walked in the near minus temperatures back to my accommodation.

And this is where it brings me, to the statistics that no longer surprise me. 50 million Americans are now reported to be living below the poverty line. Some staggering 80 percent of the American population are struggling with near-poverty or joblessness. The gap between classes is widening, we all know this, but the ‘working class’ is becoming obsolete.

In social science reports it is notated that up to 5 million people rely on food stamps to barely reach the threshold of poverty. Other factors such as medical expenses, work-related expenses and other general living expenses are increasing by the year.

Sheldon Danziger, an economist for the University of Michigan said “given current economic conditions, poverty will not be substantially reduced unless government does more to help the working poor.” [1]

Meanwhile, Congress are set to approve $9 billion in cuts to food stamps.

**All personal sources and interviews to remain anonymous. Sources will not be revealed.