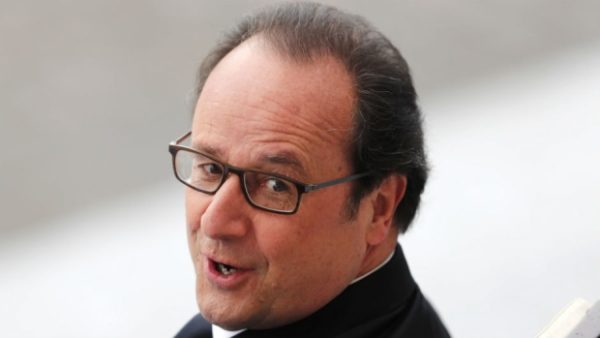 An investigative newspaper in France has made a damning revelation that the country’s president, Francois Hollande has been spending almost $11,000 every month for haircut since he became the leader of the country in 2012.

Newspaper Le Canard Enchaine reported that Mr Hollande has been paying 9,895 Euros every month from the country’s treasury to his hairdresser, who is taking care of his hair popularly known in France as coif.  The allegation has since been dubbed #CoiffeurGate by the French media.

The hashtag #Coiffeurgate has been trending on Twitter in France. French Twitter users have suggested other balding candidates for the presidency in 2017, such as Alain Juppe of the Republicans, to save taxpayers money. Some too, have photoshopped the image of Mr Hollande with different haircut styles,  mocking him of his extravagant spending on his hair.

The French government spokesman, Stephane Le Foll has confirmed the story published by the newspaper, but said he sees nothing wrong with the salary of the hairdresser of his boss. “I can understand the questions, I can understand that there are judgements. Everyone has their hair done, don’t they?” Le Foll told the French news agency, AFP in an interview.

Le Canard Enchaine revealed that in addition to the $11,000 salary every month, the hairdresser is entitled to a housing allowance and other family benefits. He also travels with president Hollande on most of his foreign trips.

The hairdresser’s contract with the president – published by the newspaper – states that he [hairdresser] must maintain absolute secrecy about his work, and with any information he may have gathered both during and after his contract.

According to French media, the amount Mr Hollande pays his personal hairdresser is roughly the same as the salary of ministers in the country’s government.

Due to legal challenges, Le Canard Enchaine only identified the hairdresser as Olivier B. Olivier B’s lawyer, Sarah Levy told the newspaper that her client deserves his wages from the president, as the job keeps him away from his family. Sarah was quoted as saying: “He missed the birth of his children.”

French media say the scandal has made the French public bristling over such an extravagant spending by a Socialist president. Mr Hollande won the presidency of the French Republic on the ticket of the French Socialist Party. The New York Times reports that Mr Hollande now faces persistently low approval ratings among the French public. The French economy is currently facing many challenges, with unemployment levels rising fast. Recently, the country was hit with mass protests over labor reforms. Critics of president Hollande have accused him of betraying the Socialist ideas and running down many businesses in the country.

Political commentators say it is not certain that Mr Hollande will stand for re-election next year. President Hollande said himself that he will decide by the end of 2016, whether to contest again for the presidency or not. He revealed that his decision will depend on his success in cutting down the staggering unemployment level in the country.

According to the New York Times, Mr Hollande is not the first politician in the Western World to face scrutiny for the price of his personal grooming.

The Times reports that in 1993, two of Los Angeles International Airport’s runways were shut for nearly an hour, so that President Bill Clinton’s Beverly Hills hairstylist could board Air Force One and give him a haircut.

In 2007, a former senator of North Carolina, John Edwards is also said to have reimbursed his presidential campaign about $800 to cover the cost of two haircuts. Again, the Republican vice-presidential nominee in 2008, Sarah Palin reportedly spent tens of thousands of dollars on her hair and makeup to have an image that appealed to voters.

This article (President Hollande Pays His Hairdresser Almost $11,000 a Month Despite France Facing Economic Challenges) is a free and open source. You have permission to republish this article under a Creative Commons license with attribution to the author and AnonHQ.com.