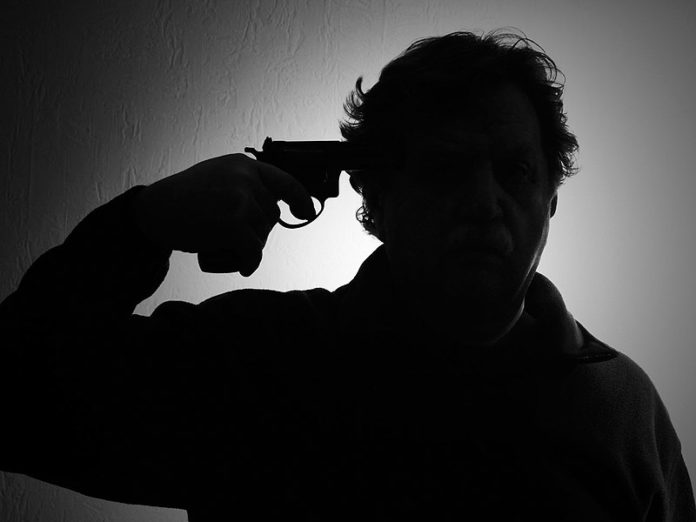 Grim tidings; white middle-aged Americans are the only group of first-world people who are dying faster than their fellows in any other developed country.

According to Nobel Prize winner Angus Deaton and Anne Case, this is because of widespread alcoholism and drug abuse as well as an epidemic of depression and suicides in the country. Did they say “terrorist”? No? Guess Bush was wrong then. Someone please confiscate his museum and put him in prison, I’m pretty sure his war in Iraq has caused a spike in suicides, alcoholism and depression, and his war in Afghanistan has produced more drug-laden poppies than any terrorist.

The economists published their findings in Proceedings of the National Academy of Sciences, following another revealing paper of theirs from 1999, exposing the relationship between income and mortality.

Since 1998, mortality rates for 45-54 year-old Americans have suddenly jumped. Unfortunately, the economists were unable to discern the exact causes for the rise; only correlations between the mortality rate and use of prescription drugs and heroine use bring us a possible cause. The economic deteorioration of the prior 20 years could also be a cause, according to Deaton.

“Addictions are hard to treat and pain is hard to control, so those currently in midlife may be a ‘lost generation’ whose future is less bright than those who preceded them,” the authors said.

“Increased availability of opioid prescription drugs, chronic pain (for which opioids are often prescribed), and the economic crisis which began in 2008 may all have contributed to an increase in overdoses, suicide, and increased liver disease associated with alcohol abuse.”

From 1978 to 1998, mortality rates were falling- a trend that was discernible in every other developed nation. However, disturbingly, mortality rates have started to rise again… increasing by half a percent every year.

Indeed, people who did not have access to higher education were found to have been worst hit:

“For those with a high school degree or less, deaths caused by drug and alcohol poisoning rose fourfold; suicides rose by 81 per cent; and deaths caused by liver disease and cirrhosis rose by 50 percent,” Deaton and Case said.

White middle aged Americans have been hit from every angle: organ damage, depression, an inability to relate with others and other types of pain force them to stop working. Those who found difficulty socializing with others were also of particular risk.

Before ya’ll start pointing out the elephant in the room, no, obesity is not the primary cause of this trend (though it is also on the rise) according to them. Correlation is not causation; perhaps the rise in obesity was caused by depression-induced binge -eating rather than vice-versa.

“All-cause mortality rose by 22 percent for this least-educated group. Those with some college education saw little change in overall death rates, and those with a bachelor’s degree or higher actually saw death rates decline.”

Prescription drugs have often been found to exacerbate suicidal tendencies, and while the government should deal with that aspect of the problem, it is but one factor of several. Social integration and poverty are other areas that need to be addressed… though is that really news? We knew that from the beginning, though it’s nice to have some “proof”, that these factors kill…

Yet the government does nothing… or worse, simply militarizes the police to kill those of us who have been left behind by the growing wealth gap, in ever increasingly abhorrent cases of police executions. In fact, you are eight times more likely to die at the hands of a police officer than a terrorist.

With a person over 2,000 times more likely to die in the US from suicide than terror attack, you can see how f****ed up their priorities are when they devote so much more tax-payer resources chasing shadows in the dark compared to finding real solutions to real problems.

CDC data, death records and national surveys on population and mortality were analysed by the researchers to arrive at their conclusion. Grim tidings, indeed.

This Article (Princeton Study: “Lost Generation”; White Middle Aged Americans Dying Faster Than In Other Developed Nations) is free and open source. You have permission to republish this article under a Creative Commons license with attribution to the author(CoNN) and AnonHQ.com.