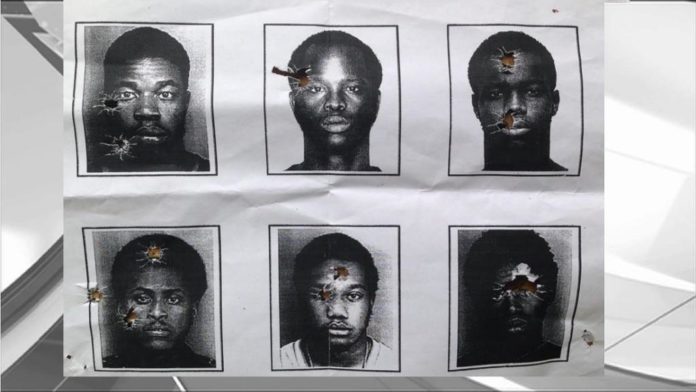 Few pastimes are more American than racism and target practice, so the most recent news from Sioux Falls, South Dakota, should not come to surprise anyone.

KSFY TV reports that this weekend’s Collector’s Classic Firearm Show needed to eject and then prohibit a seller for selling “Runnin’ Ni–er” firing range targets — these are sheets of gun range paper emblazoned with a silhouette of an African-American child running. When confronted by the KSFY news crew, the seller, who didn’t give his name, defended his merchandise:

“Aren’t [those targets] offensive in nature?” the videographer inquires.

The seller responded, “To who?”

It is difficult to envision a more appropriate example of the hostilities facing African-Americans now. In a way, the seller’s candor is refreshing. Their message is clear: “We need to imagine killing you.” What greater solution to fuel a racist imagination than empowering it to fantasize taking an African-American life?

Now, these are consumer products and unfortunately there is cash to be made in selling them. This really is essential, because an under-addressed component of the recent slayings of African-Americans by vigilantes and police, is the financial support that has swelled around their triggermen: Zimmerman raised $200,000 through his private web site after killing Trayvon Martin; Darren Wilson, who killed Michael Brown last August, had $500,000 essentially thrown at him, raised via a GoFundMe account.

There is cash to be made here, as the preceding cases suggest. If it were not profitable for somebody, this kind of racism would not continue.

However, it would be a mistake to point the finger at these folks, both the shooters as well as their suppliers, and say, “This is what racism resembles.” It wouldn’t be untrue, but it’d strengthen a misleading American instinct wherein the only racism we recognize is the type that is yelling in our faces. Institutional racism is real. Systemic racism is real.

Such events remind these naysayers, in no uncertain terms, that denying the existence of racism is a willful distortion of truth. These are literal pictures of black people being purchased and sold for shooting practice.

If this is not a clear enough sign that racism does still exist, then we don’t know what is.