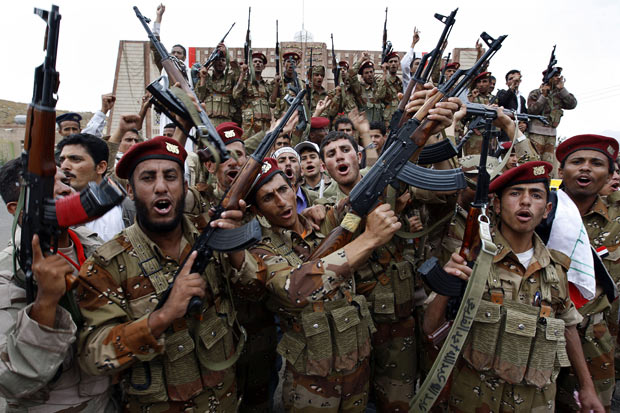 One protester was killed when gunmen fired on anti-Houthi demonstrators in Taiz, according to the al-Masdar news website and Abdulsatar al-Shameri, a protester. “The U.S. has evacuated all remaining employees in the nation,” State Department spokesman, Jeff Rathke, said in an emailed statement.

The escalation of violence threatens to divide a state that just reunified in 1990 after decades of division and draw in neighbors like Saudi Arabia, the world’s largest oil exporter. The erosion of government power has already enabled al-Qaeda to take root in Yemen and use it as a base for operations against Arab and Western countries.

“Should it turn into a civil war, afterwards we’re in a for a long, protracted battle,” Sultan Barakat, senior fellow and director of research at the Brooking’s Doha Center, said by telephone. It doesn’t seem promising.

The Houthis ordered troops to perform their responsibilities in repulsing this dirty war, based on a statement carried by the Saba news agency. They attributed terrorist components in militias loyal to globally-accepted President Abdurabuh Mansur Hadi for strikes in the cities of Aden, Lahj and Sana’a.

The bombings at Sana’a’s Badr and al-Hashoosh mosques on Friday injured nearly 350 individuals, according to local television. The mosques, like the majority of of the capital, are commanded by the Houthi rebels located in north Yemen that have been fighting both forces faithful to Hadi and al-Qaeda militants.

“There’s no one right now that can defeat the other,” Farea al-Muslimi, a visiting scholar at the Carnegie Middle East Center, said by telephone from Sana’a. It’s an extremely serious scenario.

The evacuated troops were the last U.S. staff in Yemen.

It wasn’t instantly clear who was responsible for the suicide bombings. While Islamic State claimed liability, the militant group that commands swathes of Syria and Iraq has had little participation in Yemen.

Al-Qaeda, which has often targeted the Houthis, said on Twitter that it didn’t order the strikes and prevents hitting places like the Sana’a mosques, frequented by both Sunni and Shiite Muslims.

Houthi spokesman, Mohammed Abdulsalam, in a statement on Facebook Saturday, accused Hadi of backing al-Qaeda in the south of the nation and in Marib and al-Baidha states. The Houthis accuse the Gulf Arabs of meddling in Yemen’s affairs and say Hadi’s authorities, counted by the U.S. as an ally against al-Qaeda, was covertly backing the jihadist group.

Hadi was evacuated from his palace in Aden during extreme gun battles between his combatants and competing troops true to Saleh, the prior president – his complex was also hit by airstrikes.

The U.S. State Department has condemned the suicide bombings and the assaults on Hadi’s palace, attributed the Houthis and Saleh for violent incitement, and advocated a return to peace talks brokered by the United Nations.