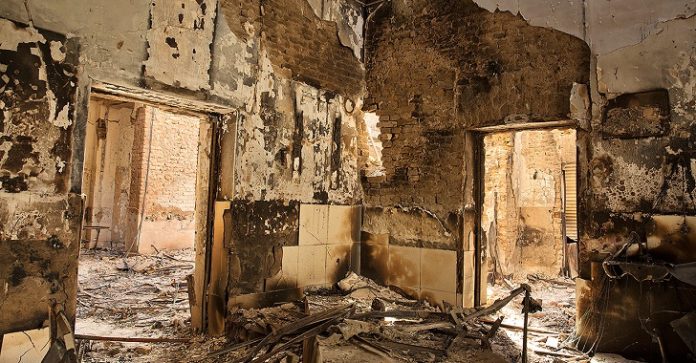 Kunduz, Afghanistan — “Many staff describe people being shot, most likely from the plane, as people tried to flee the main hospital building that was being hit with each airstrike. Some accounts mention shooting that appear to follow the movement of people on the run.” — Médecins Sans Frontières (Doctors Without Borders)

On Thursday, Médecins Sans Frontières released initial conclusions of an investigation into what now appears to be the direct targeting of their hospital in Kunduz, Afghanistan on October 3.

“We need a clear commitment that the act of providing medical care will never make us a target. We need to know whether the rules of war still apply,” MSF International President Joanne Liu demanded in a press release Thursday.

Despite the United States’ insistence the MSF hospital had not been targeted, officials notoriously waffled in the days following the bombing. A U.S. tank even ran over and destroyed viable evidence after the bombing. Eyewitness accounts aggregated for the MSF report offer keen insight into why officials had such a difficult time keeping their stories straight — the U.S. needed to figure out which cover story people would buy.

Médecins Sans Frontières makes clear all policies meant to protect their patients and staff — such as a strict no-weapons rule and reporting of exact GPS coordinates for the facility to all sides involved in the conflict — were firmly in place and had been verified in the days and hours leading up to the bombing.

“A series of multiple, precise and sustained airstrikes targeted the main hospital building, leaving the rest of the buildings in the MSF compound comparatively untouched. This specific building of the hospital correlates exactly with the GPS coordinates provided to the parties of the conflict (GPS coordinates were taken directly in front of the main hospital building that was hit with the airstrikes).”

According to the report, U.S. airstrikes began between 2:00 am and 2:08 am local time and continued to pummel the building for an hour to an hour and fifteen minutes. At least thirty patients and staff were killed by the strikes, though MSF emphasized some victims may never be identified because their bodies were burned beyond recognition.

MSF staff inside the compound at the time acknowledged an unusual peace had settled in the area in the hours before the strikes began, and that some staff “were even able to stand in the open air of the hospital compound.” As for (one of) the U.S.’ explanations at the time of being called in to strike by Afghan forces who requested assistance due to fighting in the compound? Shamefully and clearly nullified.

During the U.S. airstrikes, MSF staff reported clearly hearing an AC-130 (propeller aircraft) circling the area, and heard “shooting coming from the plane.”

Listed in the Médecins Sans Frontières report is a timeline of phone calls placed by the organization from the time the strikes began until they finally relented. After first contacting the International Red Cross to inform them the Kunduz hospital had been bombed, MSF proceeded to contact NATO Resolute Support and the UN OCHA Civil-Military liaison. Eventually, the MSF New York office made a desperate call to the Department of Defense in Washington.

Despite numerous attempts to plead for assistance and relief from coming under attack, the bombings continued.

The full report reads like a horror script and makes indisputably clear “from the staff debriefings and photos that the main hospital was the principal target of the attack.” Incidentally, another Médecins Sans Frontières facility in Yemen recently came under U.S. attack. Has the United States instituted a policy to ignore international rules of military engagement?

Let’s see the United States government explain its way out of this war crime.

This article (Report: US Shot At Victims Fleeing Bombing of Doctors Without Borders Hospital) is free and open source. You have permission to republish this article under a Creative Commons license with attribution to Claire Bernish andtheAntiMedia.org. Anti-Media Radio airs weeknights at 11pm Eastern/8pm Pacific. If you spot a typo, email[email protected].