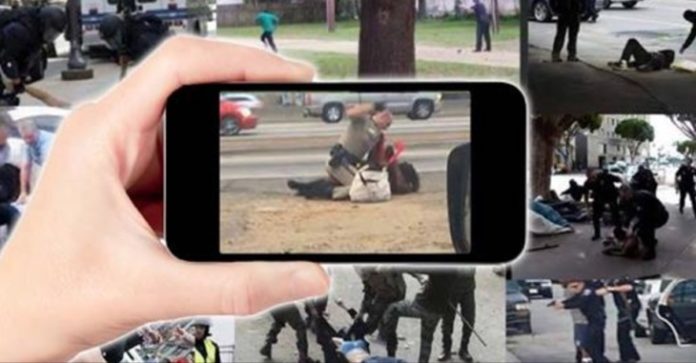 There’s been an ongoing battle between police and the citizenry over who has the right to film in public. Disputes between police and the public have led to camera’s being confiscated by police, and citizens being manhandled, beaten, and arrested. Now, it seems, the courts are weighing in, and not on the side of police.

The court’s opinion comes from a federal civil rights lawsuit filed by Phillip Turner vs. Driver, Grinald, and Dyess (2017). The plaintiffs are all officers from Ft. Worth, Texas. According to court documents, “Plaintiff-Appellant Phillip Turner was video recording a Fort Worth police station from a public sidewalk across the street when Defendants- Appellees Officers Grinalds and Dyess approached him and asked him for identification. Turner refused to identify himself, and the officers ultimately handcuffed him and placed him in the back of a patrol car.”

Prior to this case, as we’ve reported before, even though other courts have found the filming the police is protected, it is still challenged. U.S. District Judge Mark Kearney of the Eastern District of Pennsylvania issued a ruling last year stating that citizens do not have a First Amendment right to record the police in public. This was in spite of the ruling of Glik v. Cunniffe which found a citizen’s right to film government officials, including law enforcement officers, in the discharge of their duties in a public space is a basic, vital, and well-established liberty safeguarded by the First Amendment.

This court even pointed it out. According to the recent precedent:

“At the time in question, neither the Supreme Court nor this court had determined whether First Amendment protection extends to the recording or filming of police. Although Turner insists, as some district courts in this circuit have concluded, that First Amendment protection extends to the video recording of police activity in light of general First Amendment principles, the Supreme Court has “repeatedly” instructed courts “not to define clearly established law at a high level of generality”: “The general proposition, for example, that an unreasonable search or seizure violates the Fourth Amendment is of little help in determining whether the violative nature of particular conduct is clearly established.” Thus, Turner’s reliance on decisions that “clarified that [First Amendment] protections . . . extend[] to gathering information” does not demonstrate whether the specific act at issue here—video recording the police or a police station—was clearly established.”

The court went on to note that police nor Turner had a precedent to reference in which filming cops was specifically protected as a first amendment right.

In light of the absence of controlling authority and the dearth of even persuasive authority, there was no clearly established First Amendment right to record the police at the time of Turner’s activities.

In the recent ruling, the Fifth Circuit Court of Appeals weighed in on the citizens’ rights to film police movement, activities and buildings. The court determined,

“We conclude that First Amendment principles, controlling authority, and persuasive precedent demonstrate that a First Amendment right to record the police does exist, subject only to reasonable time, place, and manner restrictions.” The court set the first ever precendent giving citizens the right to film police, within reason, of course. In other words, the court believes the public has a right to film police so long as it is within reason, in public, and not in private. Going further, the court seemed to empathize with the public’s demand for a transparent government. They wrote, “speech is an essential mechanism of democracy, for it is the means to hold officials accountable to the people. The right of citizens to inquire, to hear, to speak, and to use information to reach consensus is a precondition to enlightened self-government and a necessary means to protect it.”

Turner asserted his first amendment rights were violated when he was disallowed from filming the police station he was recording. For refusing to provide identification when asked, Turner was detained, handcuffed, and placed into the back of a squad car —an action he contends was a violation of his fourth amendment rights to unreasonable search and seizure and arrest.

When the supervisor arrived, Turner told him he was aware of his rights to withhold his identity. The supervisor agreed, he was given back his camera and allowed to leave. Unfortunately, the court’s ruling was not put in place prior to his case, or else he would have been allowed to continue filming and free to come and go as he pleased. Even though he never was sent to jail, his detainment was a form of arrest, a contention he raises going further with his case.

While the Texas precedent is not a national precedent, those who are attempting to film the police can, nonetheless, cite the precedent in the hopes police officers will continue to allow them to film without being impeded. Until such time as the Supreme Court weighs in on the matter, the right to film police will still continue to be a matter of contention between the police and the public, and dealt with on a state by state basis.

For his part, Turner appears to welcome the challenge to take his case all the way to the Supreme Court. We reached out to Turner for comment but have not yet heard back from him as of the writing of this article. But he did post a comment to his Facebook page. “5th circuit established, is the Supreme Court next??,” he stated, apparently feeling the weight of his victory in court.

If you or someone you know is planning to attempt to film cops, here’s some things you need to know. According to the ACLU’s guide to photographing in public:

“Taking photographs and video of things that are plainly visible in public spaces is a constitutional right—and that includes transportation facilities, the outside of federal buildings, and police and other government officials carrying out their duties.”

The right of citizens to record the police is a critical check and balance. It creates an independent record of what took place in a particular incident, one that is free from accusations of bias, lying, or faulty memory. It is no accident that some of the most high-profile cases of police misconduct have involved video and audio records.”

As for video, the ACLU recommends:

No matter who you are you have the First Amendment right to:

Peacefully assemble and protest in public spaces and photograph and videotape the police or anything else in a public space.

The right to take photos does not give you the right to:

If you’re stopped or detained for taking photos:

Be polite.
Don’t resist.
Ask, “Am I free to go?”
If the officer says “no,” you are being detained.
If you are detained, ask what crime you’re suspected of committing.
Until you ask to leave, being stopped is considered voluntary.

It’s perfectly reasonable and acceptable to remind the police officer that “taking photographs is your First Amendment right” and “does not constitute reasonable suspicion of criminal activity” according to the American Civil Liberties Union.

This article (Right To Film Cops Officially Established In Federal Court) by Jack Burns is free and open source. You have permission to republish this article under a Creative Commons license with attribution to the author and TheFreeThoughtProject.com