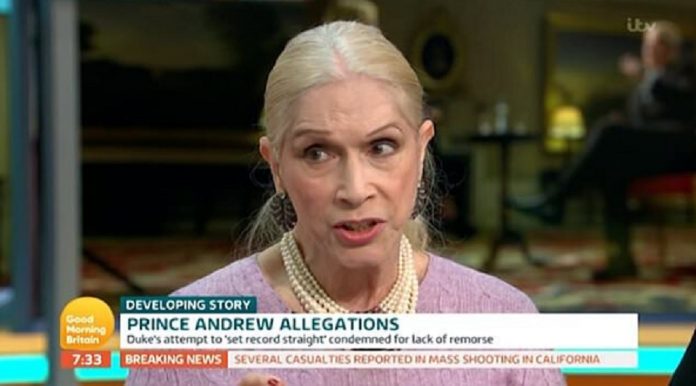 In her defense of the disgraced prince, Campbell pointed to the “prostitution” charge that Jeffrey Epstein was convicted of in 2008, and attempted to downplay the fact that the girls were underage by suggesting that he was simply hiring sex workers.

“You all seem to have forgotten that Jeffrey Epstein, the offense for which he was charged and for which he was imprisoned, was for soliciting prostitution from minors. That is not the same thing as pedophilia,” Campbell told a shocked panel Monday morning.

“If you solicited a 14-year-old for prostitution, you’re a pedophile.

You’re procuring an underage girl for sex. That’s what he was convicted of. I’m sorry, I’m sorry, with respect, that is nonsense.”

Campbell then immediately attempted to backpedal, claiming that a distinction must be made between a minor and a child.

“Was he? 14? Well, I’m not justifying Jeffrey Epstein. Pedophilia, I suspect there’s a difference between a minor and a child,” she said.

Campbell then admitted that the prince may have “made many mistakes,” but insisted that his only mistake was being too clueless to realize that one of his closest friends was a predator.

“You can’t criticize someone because they aren’t as bright as you would like them to be,” she said.

“He was procuring 14-year-old prostitutes, they were not minors they were prostitutes, there is a difference."- Lady Colin Campbell, Aristocrat & Royal Biographer on Prince Andrew and Jeffrey Epstein.The aristocracy sure has a weird view of peadophilia. Epstein was convicted of soliciting sex from a minor. A 14yo – and that’s just the one he was convicted for! That is peadophilia whether the aristocracy are comfortable with it as a definition, or not. It must give you a distorted sense of personal responsibility to be so powerful that laws, and even the dictionary definition of words, don’t apply to you. No wonder Prince Andrew stayed with Epstein after his conviction – he probably didn’t expect the story to ever come out. Makes you wonder what else they’re up to…

Posted by The Daily Politik on Monday, 18 November 2019

The controversy surrounding Prince Andrew has grown since his Newsnight interview with Emily Maitlis. In the interview, the prince gave a variety of bizarre excuses and defenses for the accusations against him, including a claim that he could not sweat due to a rare physical condition.

He also denied knowing about the trafficking victim, Virginia Giuffre—formerly known as Virginia Roberts—despite appearing in photos with her when she was under the age of 18. However, he has previously suggested that these photos are “doctored.” Photographic evidence has been uncovered showing that the prince does, in fact, sweat. He also claimed that even though he did not remember meeting the victim on the night that she said, he does vividly remember his alibi, saying he went to a Pizza Express in Woking before returning home that night.

The interview was so disastrous for the Royal Family that one of Prince Andrew’s PR advisors quit in response to the broadcast. And to make matters even worse, a video clip from 1984 recently resurfaced showing Johnny Carson, then-host of The Tonight Show, making a joke about Prince Andrew being a pedophile.

None of this looks good for the Royal Family.