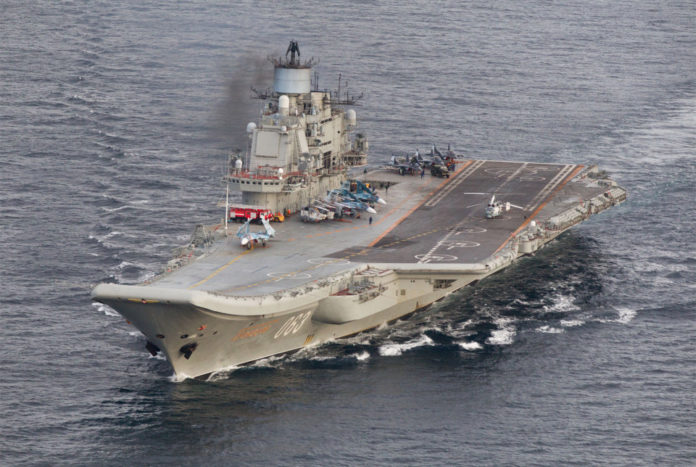 First things first:  the move has got nothing to do with preparing for World War III or getting even with the United States.

Russian President Vladimir Putin has sent the biggest ship in the Russian navy — the Soviet-era aircraft carrier Admiral Kuznetsov — to the eastern Mediterranean to carry out air strikes against rebel and terrorist factions (including the Islamic State and the al-Qaeda off-shoot al-Nusra Front) in war-torn Syria.

More famously known as a heavy aircraft-carrying missile cruiser, the Kuznetsov is expected to strengthen the Russian military campaign in Syria, as well as serve as a hedge against a possible U.S. aggression.

26 years after Russia’s only aircraft carrier entered service, the Kuznetsov is heading into combat for the very first time to “respond to new types of modern threats like piracy and international terrorism.”

Putin recently approved a law ratifying Moscow’s deal with Damascus to deploy Russian forces in the country indefinitely, in an attempt to transform its naval facility in the Syrian port city of Tartus into a permanent base.

The development doesn’t come as a shock. Sergei Shoigu, Russia’s Defense Minister, had made the announcement of sending the Admiral Kuznetsov aircraft carrier to head the Russian flotilla in the Mediterranean Sea in September:

“Currently, the Russian naval group in the eastern Mediterranean includes not less than six warships and three or four support vessels. We plan to incorporate into its composition a naval aircraft carrier group with the Admiral Kuznetsov aircraft cruiser in order to increase combat capabilities of the grouping.”

According to the Russian defense ministry, the Admiral Kuznetsov is escorted by seven other Russian warships — the nuclear-powered battle cruiser Peter the Great, the Vice-Admiral Kulakov destroyer, the anti-submarine vessel Severomorsk, and four support vessels from Russia’s Northern fleet.

Based in Severomorsk in the Barents Sea in the Arctic, the carrier Admiral Kuznetsov and seven other vessels were photographed on Monday in international waters off Norway, Major Elisabeth Eikeland, spokeswoman of the National Joint Headquarters in the Norwegian army, confirmed. The Kuznetsov Task Group situation is normal routine for the Norwegian military; the only unusual thing is the amount of ships, she told the BBC. The Admiral Kuznetsov is 306 meters long, supports an air wing of up to 40 fixed and rotary wing aircraft, has a displacement of 61,390 tons, can carry up to 50 aircraft and helicopters, and develop a maximum speed of 29 knots.

In July, a military-diplomatic source in Moscow told TASS (the largest Russian news agency), that the Admiral Kuznetsov will participate in delivering strikes against militants in Syria from an eastern part of the Mediterranean Sea between October 2016 and January 2017. During the voyage, TASS reported, the aircraft carrier will have about 15 fighters Su-33 and MiG-29K/KUB and more than 10 Ka-52K, Ka-27 and Ka-31 helicopters.

“The General Staff has prepared a plan for involvement of the deck aircraft in delivering strikes on terrorist groups in the Syrian Arab Republic, where the crews will practice taking off the carrier to deliver strikes on ground targets. The aircraft carrier will come to the Mediterranean Sea roughly before end of January – early February, after that it will return home and in February-March it will undergo maintenance and modernization in Severodvinsk, supposedly at Sevmash.” Should the world worry about a possible U.S.-Russia confrontation?

“The last time Russia’s sole aircraft carrier sailed into the Mediterranean Sea, five years ago, the U.S. Navy’s 6th Fleet kept a close eye on its progress. The concern among American officers wasn’t the ship’s contingent of fighter planes; instead, it was the very real worry it would sink and necessitate a potentially risky rescue operation.

“The Kuznetsov lacks the catapults found on American and French carriers that shoot jets off the short decks at high speed. Instead, the Russian ship — like India’s and China’s first carriers — features a “ski jump” lift at the bow to help planes get airborne. That kind of deck means the planes, about 15 Su-33 and MiG-29s, have to fly light, with smaller loads of fuel and half-empty bomb racks. The 10 Nimitz–class carriers in the U.S. Navy, such as the USS Dwight D. Eisenhower, currently in the Middle East launching strikes on the Islamic State, can carry at least 60 aircraft and launch them with full fuel and bomb loads.”

The Admiral Kuznetsov and its weapons systems are unlikely to make much difference to Russia’s bombing campaign in Syria. Maxim Shepovalenko, a retired Russian navy captain and currently the deputy director of the Center for the Analysis of Strategies and Technologies in Moscow, told The Daily Beast:

“Kuznetsov has never performed a land strike role and it doesn’t make any sense to use [her] that way, considering the availability of the Latakia air base. Just compare the tonnage, stores, and air-wing strength of a Nimitz-class and those of Kuznetsov. No match.”

This article (Russia Deploys Combat-Ready Aircraft Carrier in the Eastern Mediterranean off Syria’s Coast) is a free and open source. You have permission to republish this article under a Creative Commons license with attribution to the author and AnonHQ.com.