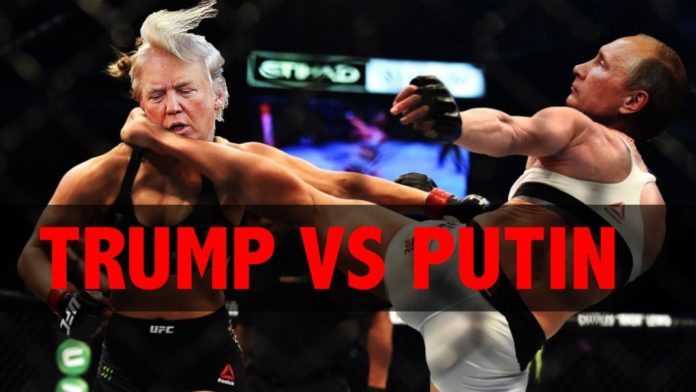 Russian President Vladimir Putin has condemned the Trump administration’s decision to launch between 50 and 60 Tomahawk cruise missiles against a Syrian airbase today.

US President Donald Trump gave the order without Congressional or United Nations approval.

The missiles, fired from two US Navy warships, against a strategic airbase in Syria, were in response to the chemical attacks – reported to be Sarin – against civilians earlier this week. Russia, since the chemical attacks, maintained the need for a full investigation before accusing the Assad regime of war crimes.

In a release coming in this hour, the Kremlin accused the US of “aggression against a sovereign state in violation of international law.”

Konstantin Kosachev, chairman of the international affairs committee in the upper house of the Russian parliament suggested that Trump was under pressure from the Pentagon to act and that any hope of a future US-Russian anti-terror coalition had now been “put to rest without even being born.”

Alexei Pushkov, the head of information policy commission in the Russian upper house commented prior to the US missile strikes that Trump would be in “the same league with Bush and Obama,” if they occurred, giving little hope now of a US-Russian alliance.

Although the US maintains Russia was informed of the pending missile strikes, and that they deliberately avoided areas where Russians were, they never sought approval from Moscow. The strikes, which occurred at 2040 hours, Thursday, EDT, struck multiple targets at the Shayrat Air Base, which the Pentagon claims was used to house chemical weapons.

Syria has called the missile attack a US act of aggression; the airbase was considered to be the most important tactical location to launch attacks against the rebels and Islamic State in the area.

Trump supports his decision, saying “There can be no dispute that Syria used banned chemical weapons, violated its obligations under the chemical weapons convention and ignored the urging of the UN Security Council.”

The UN was awaiting a full report on the chemical attacks in Syria before it was to make a decision, drafting a resolution on Wednesday and calling for a full investigation. However, US ambassador to the UN, Nikki Haley, warned the Security Council that the Trump administration would take action if they did not.

The Foreign Ministry spokesman for Indonesia, Armanatha Nasir was also deeply troubled with the US launch: “Military actions, undertaken without prior authorisation of the U.N. Security Council, are not in line with international legal principles in the peaceful settlement of disputes, as stipulated in the U.N. Charter.”

In favour of the missile attack against Syria was Turkey, Israel, the UK, Australia and parts of Europe.

This article (After US Airtrike On Assad: Putin Angry And Not Friends Anymore With Trump) is a free and open source. You have permission to republish this article under a Creative Commons license with attribution to the author AnonWatcher and AnonHQ.com.