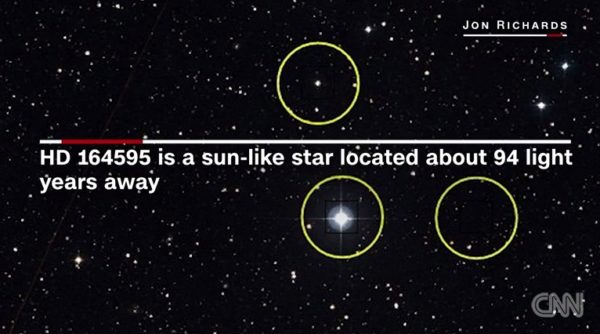 Extraterrestrial life, commonly referred to as alien life, is the life that does not originate from the Earth. Some cosmologists believe alien life ranges from simple bacteria-like organisms to civilizations that are far more advanced than that of human beings. However, some also believe that contacting aliens will be dangerous for humanity. There are other researchers who are completely skeptical about alien life.

It has emerged that Russian astronomers engaged in the Search of Extraterrestrial Intelligence (SETI), have detected a strong mysterious radio signal on a sun-like star, around 94 light years from Earth. Light years is a unit of length used informally to express astronomical distances. One light year is approximately 9 trillion kilometres. The international team of astronomers searching for alien life, Messaging Extraterrestrial Intelligence (METI) has said that what the Russians have detected is remarkable, and could possibly lead to the discovery of alien life.

The Italian astronomer, Claudio Maccone, who together with his team has been studying the signal the Russians, announced the signal as a “strong candidate for SETI.” Maccone said whenever a strong signal is detected, it is a possibility for nearby civilizations to be detected. President of METI, Douglas Vakoch said if the signal is found to be artificial, it will prove that there is life somewhere, apart from what exists here on Earth.

“The signal from HD 164595 is intriguing, because it comes from the vicinity of a sun-like star, and if it’s artificial, its strength is great enough that it was clearly made by a civilization with capabilities beyond those of humankind,” he told CNN in an interview.

Mr Vakoch further said, despite the interest the detection has sparked among the astronomy community, astronomers need to come together and analyze the detection to make the findings more credible.  He said: “Without corroboration from an independent observatory, a putative signal from extraterrestrials doesn’t have a lot of credibility.”

Paul Gilster of the Tau Zero Foundation, which conducts interstellar research, also told CNN that if the signal was artificial, its strength suggested it would have to come from a civilization more advanced than what is currently on Earth. Recently, the German investigative weekly news magazine, Der Spiegel revealed that researchers at the European Southern Observatory (ESO) have discovered a new Earth-like planet with water. Several attempts by journalists to have the ESO confirm or deny the report by Der Spiegel proved futile, prompting some Conspiracy Theorists to say the organization has discovered a planet inhabited by aliens, and is hiding it from the public.

This article (Russians Detect Strong Mysterious Radio Signal from Sun-like Star, Sparks Alien Speculation) is a free and open source. You have permission to republish this article under a Creative Commons license with attribution to the author and AnonHQ.com.