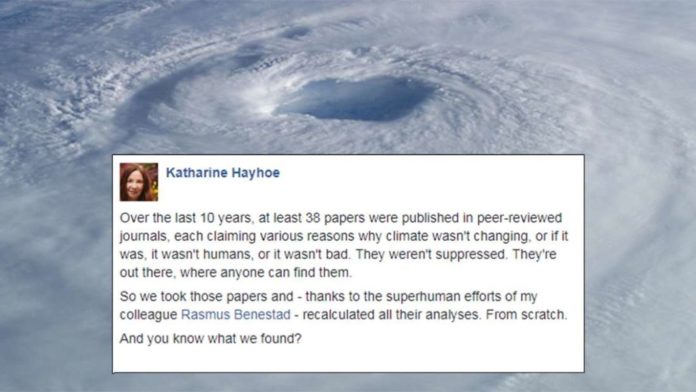 97.1% of scientific studies support the view that climate change is real and is caused by humans. Even though the scientific community has the evidence, climate-change deniers  claim they maybe 2.9% right.

American Senator Ted Cruz famously said a few years ago: “Today, the global warming alarmists are the equivalent of the flat-Earthers. It used to be [that] it is accepted scientific wisdom the Earth is flat, and this heretic named Galileo was branded a denier.”

However, Katharine Anne Scott Hayhoe, author of a study that has already looked at the 2.9% of studies that deny climate change is man-made, recently took to Facebook to slam climate change deniers in a brilliant viral post:

When Katharine and her colleague tried to recreate the results from the studies that claim climate change is a hoax, “every single one of those analyses had an error – in their assumptions, methodology, or analysis – that, when corrected, brought their results into line with the scientific consensus.”

“The idea is that accurate scientific research should be replicable,” Dana Nuccitelli, one of the paper’s authors, wrote in the Guardian. “The study also seeks to answer the question, why do these contrarian papers come to a different conclusion than 97% of the climate science literature?”

Global warming is caused by the emission of greenhouse gases: 72% of the totally emitted greenhouse gases is carbon dioxide. In another Facebook post, Katharine highlights facts and figures to show how the amount of carbon dioxide we produce from burning coal, gas and oil, deforestation, land use change, and cement manufacturing contributes heavily to global warming: