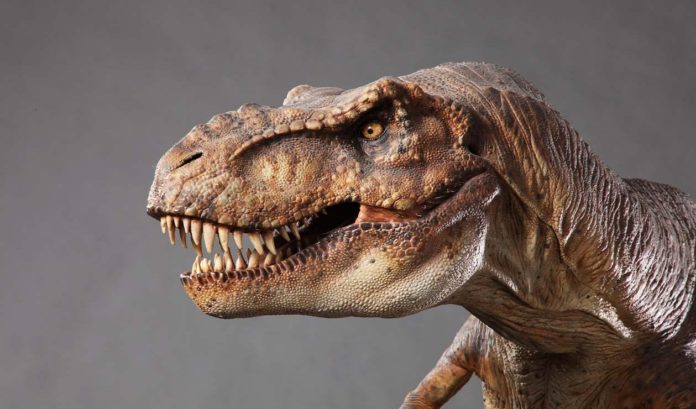 You don’t need humans anymore to destroy this planet; scientists at North Carolina State University have found a way to bring Tyrannosaurus Rex back on Earth to do the job. And no, we are not joking.

A team of researchers from North Carolina State University and the North Carolina Museum of Natural Sciences examined the femur of a 68 million-year-old dinosaur unearthed in Montana in 2000, and found a medullary bone – which means Tyrannosaurus Rex was pregnant at the time she died – to suggest that the dinosaur fossils may contain DNA that, apart from helping in learning more about the evolution of egg-laying in birds, could be used to bring the ancient beast back from the dead.  Or, at least take scientists a step closer to cloning the species.

“Yes, it’s possible. We have some evidence that fragments of DNA may be preserved in dinosaur fossils, but this remains to be tested further,” Dr Lindsay Zanno, assistant research professor of biological sciences at North Carolina State University and head of the North Carolina Museum of Natural Sciences’ Paleontology Research Lab, told Discovery News. Scientists were able to identify the medullary bone because of keratan sulfate, a material found to be consistent with known medullary tissues from ostriches and chickens. Dr Zanno explained how the medullary bone — which is only present in female birds related to dinosaurs — functions:

“It’s a special tissue that is built up as easily mobilized calcium storage just before egg laying. The outcome is that birds do not have to pull calcium from the main part of their bones in order to shell eggs, weakening their bones the way crocodiles – the closest living relatives of dinosaurs – do. Medullary bone is thus present just before and during egg laying, but is entirely gone after the female has finished laying eggs.”

Pregnant T. rex found, may contain DNA. Have we learned NOTHING from Hollywood?https://t.co/uqch12lYQW pic.twitter.com/l4W8bBkgOI

In 2005, Dr Mary Schweitzer, a paleontologist at North Carolina State University and lead author of the research, found what she believed to be medullary bone in the femur of the 68-million-year-old T-Rex fossil. But Schweitzer was able to confirm her suspicions only after she, Zanno and their team conducted a chemical analysis of the femur.

“All the evidence we had at the time pointed to this tissue being medullary bone but there are some bone diseases that occur in birds, like osteopetrosis, that can mimic the appearance of medullary bone under the microscope. So to be sure we needed to do chemical analysis of the tissue. This analysis allows us to determine the gender of this fossil, and gives us a window into the evolution of egg laying in modern birds.”

In a prior study, Dr Sarah Werning, assistant research professor of the University of California and Berkeley, and her team found medullary bone in the carnivorous dinosaur Allosaurus as well as in the plant-eating dinosaur Tenontosaurus.

“We were lucky to find these female fossils. Medullary bone is only around for three to four weeks in females who are reproductively mature, so you’d have to cut up a lot of dinosaur bones to have a good chance of finding this.”

The T-Rex’s remains might also provide clues about how to identify male and female theropods or bipedal meat-eating dinosaurs. Dr Zanno noted:

“It’s a dirty secret, but we know next to nothing about sex-linked traits in extinct dinosaurs. Dinosaurs weren’t shy about sexual signaling, all those bells and whistles, horns, crests, and frills, and yet we just haven’t had a reliable way to tell males from females. Just being able to identify a dinosaur definitively as a female opens up a whole new world of possibilities. Now that we can show pregnant dinosaurs have a chemical fingerprint, we need a concerted effort to find more.”

This Article (Scientists Say T-Rex Was Pregnant, Fossils May Contain Dinosaur DNA) is free and open source. You have permission to republish this article under a Creative Commons license with attribution to the author and AnonHQ.com.