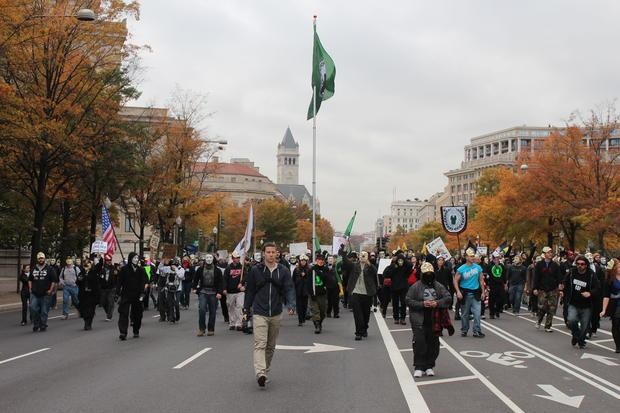 Million Mask March to remind the world that fairness, justice and freedom are more than just words.

So what is the largest collective real-world operation? Well if you think it is the Million Mask March then you are absolutely correct. In the previous year this event was able to get a huge success in causing the loosely knit network together for one whole day, it was because the event took place on a huge scale, it was practised in every city making Million Mask March a great accomplishment for Anonymous.

In the previous year, the homeless people from the city didn’t starve as Anonymous activists showed up well in advance of the 5th November and did a job that everyone of us should try to do at least once a week, they started feeding city’s homeless people. Marchers met each other on the morning of 5th November at Washington Memorial and then they soon made their way to march to Lafayette Park through the streets from the White House. All the efforts done by the Officers to hold the protesters were all worthless. A number of people were arrested in the event, whereas most of these arrests were just minor catch and release arrests, but some officers trumped several charges against an Anonymous activist that cuts a police line. But, as it is said that truth can’t be hidden for long, soon with the help of video evidence, the obvious lies by the officer were exposed and all the major charges on the Anonymous activist were discharged.

Due to the first arrest there was a tense atmosphere but soon the marchers got back in action and made their way to Pennsylvania Avenue where they continued their protest, which caused the closing down of country’s most famous street. On their way the marcher decided to take a halt at the Department of Justice Building but DOJ employees had different plans, they closed their doors and decided to stay inside until the marchers moved on. The activists then took their march toward the road of the Capitol and protested on their way. Later they took over all the streets of Nation’s Capital again and then made their way back to the White House, but before reaching their target the Activists stopped by some of the notable buildings which included World Bank, Monsanto.

Officers from DC were in a trouble on 5th, the reason was the unpredictable protest in the city, and some of the officers had intentions of conducting surveillance and trying to threaten the protesters whereas the rest of the officers put all their efforts in preventing the marchers from being hit by vehicles. The surveillances for the marchers were being led by the law enforcement officials and corporate entities. For this year’s protest several big names are in the limelight, it was reported that Lee Camp and Immortal will be attending the DC march, whereas the author of FREEDOM! And famous activist Adam Kokesh has made a commitment that he will be attending the Denver March. Not only these two guys, the man known a Steve Grant who filmed a music video at the DC march the previous year is also joining the march this year. People like Stewart Rhodes of the Oath Keeper and Bobby Seale of the Black Panther movement are invited to join the protest this year. It looks like the goal of Million Mask March which is bringing different activist movements around the political spectrum and uniting them. The representatives which are expected to join are from the civil rights, LGBT, veterans, food awareness, and media corruption movements.

The Anti-Media had a talk with John Fairhurst who is an arranger of the Million Masks March, regarding this year’s event, he replied:-

I think this year is going to be more intense than last year. Due to the current state of international affairs as well as on-going domestic issues. I think this year will be somewhat different because as cliché as it is: people are sick and tired of being sick and tired. The overreaching arm of the government as well as the militarized police state is blatantly obvious even to those who are not ‘awake’.

For this year, the schedule for event is as follows:-

The event will start at 9am at the Washington Monument and then they will march to the White House at 10:30am. After that, we can only guess. It seems like the organizers are capitalizing the hard to guess nature of Anonymous, this is for their try to maintain a kind of suspense as no one knows what will happen next and can only keep guessing what is going to happen the next moment. Organizers are recommending people joining the march to bring water, protein bars (non-GMO), and cool heads.

John Fairhurst highlighted the collective’s commitment to non-violence, and mentioned:-

The time is now people. All over the world the shift is happening; now or never. It’s time to go beastmode. It’s time to make a decision, a very important one, probably the most important. Make it now. The rEVOLution will not be televised. It will be in your front yard.