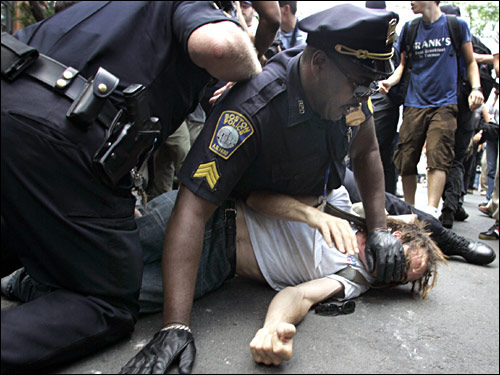 Police in the United States are now using ‘Stingrays’ to track phones. The Stingray is an IMSI catcher (International Mobile Subscriber Identity) manufactured by the Harris Corporation. The way it works is that it gathers signals from nearby cell phones to pinpoint a suspect’s location. These cell phone tower simulators, or IMSI catchers, were designed so that neither the cell phone’s user nor carriers can detect their utilization.

In order to understand the Stingray better, we need to understand how a cell phone finds a signal tower. Put simply, cell phones typically look for the strongest, and therefore usually closest, tower that is broadcasting a cell signal to link into the network in order to send or receive phone calls, SMS, MMS, or internet data.

The Stingray device, once activated, mimics a cell tower, providing the best signal in the area which tricks cell phones to register with it. (NOTE: The phones are not required to be on a call or using internet or even sending or receiving any kind of messaging.) The cellular phone then transmits its phone number and unique electronic serial numbers (ESN, IMEI and IMSI) to the Stingray. This allows the phone to be tracked.

Using a Stingray, the police can do the following, and more:

The use of this device has been funded by the Department of Homeland Security for the Los Angeles Police Department. The device was introduced in 2006 to battle ‘regional terrorism,’ but there is almost always an abuse of power; according to a report published by the Electronic Frontier Foundation, “the LAPD has been using it for just about any investigation imaginable.”

In addition to the police, federal law enforcement agencies, the military and various other intelligence agencies are also using Stingrays for their own purposes. According to the American Civil Liberties Union, the device is being used in 42 law enforcement agencies in 17 different states, all purchased under ‘anti-terror grants’ as the cost of each unit varies from $15,000 to $130,000. Image Source: Wikipedia – A US map showing the usage of Stingray by law enforcement agencies (red being the highest).

Furthermore, this is not only limited to the US; the Sunday Times and Privacy International have reported, “The usage of Stingrays and IMSI catchers has reached Ireland, against the Irish Garda Síochána Ombudsman Commission (GSOC), which is an oversight agency of the Irish police force Garda Síochána.”

Listening to people’s calls is one thing, but keeping this secret from the court systems is a complexly different game. In 2014, police in Florida revealed that they had used such apparatus at least 200 times since 2010, without telling the courts or acquiring a warrant. The American Civil Liberties Union has filed increased requests for the public records of Florida law enforcement agencies concerning their merit of the cell phone tracking devices. Naturally, local law enforcement as well as the government have opposed legal appeals for information regarding the use of Stingrays.

In June of 2014, the American Civil Liberties Union distributed intel from court with reference to the broad utilization of these gadgets by Florida police. After this, the US Marshals Service snatched the local police’s reconnaissance mission records to keep them from showing up in court.

Image Source: Google Image – An image showing how Stingray mimics a cell tower which allows the cellphone to connected to the device.

The ACLU has stated that an illegal government reconnaissance mission of this scale should not be kept hidden from the population nor should law enforcement be permitted to conceal its use from judges.