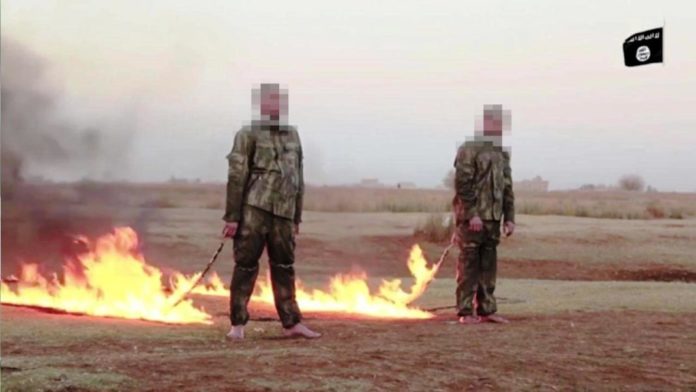 Another horrible ISIS video has surfaced on the web, showing two Turkish soldiers being burnt alive. However, as a natural response, Turkey blocked the nation from YouTube, Twitter and Facebook where the video is trending the most.

Their reason for blocking the video is the fear of social unrest. Moreover, they have released barbaric videos before, but this will no doubt disturb the Turkish people, thus the best way to go about it, according to Turkish officials, is to block it. Although many of the videos have already been removed from YouTube, The Daily Mail has an altered copy of it.

The video shows two soldiers that are fully aware of what is about to happen to them; the ISIS members say that the soldiers were executed in Wilayat, Halab, a territory that was taken by ISIS.

The nineteen-minute long video shows clips of Abu Bakr Al-Baghdadi, who once talked about Turkey and called it a nation that was out of Islam. It then continued with the dread and horror clips of suicide bombers that later ended with a member of ISIS giving an opening speech about the captured Turkish soldiers who have chains around their necks. After the speech ends the soldiers are told to crawl a certain distance; members of ISIS then set fire to the fuse, which slowly sets ablaze both the Turkish soldiers.

According to many reports – that are still yet to be confirmed by the Turkish investigators – one of the soldiers in the video is named Sifter Tas, who was kidnapped from the south of Turkey last year during a battle between the Turkish army and ISIS.

However, the name and information on how the other Turkish soldier was taken is still under investigation.

This article (Sick ISIL Savages Film Themselves Burning Two Turkish Soldiers Alive in Disturbing Execution) is a free and open source. You have permission to republish this article under a Creative Commons license with attribution to the author and AnonHQ.com.