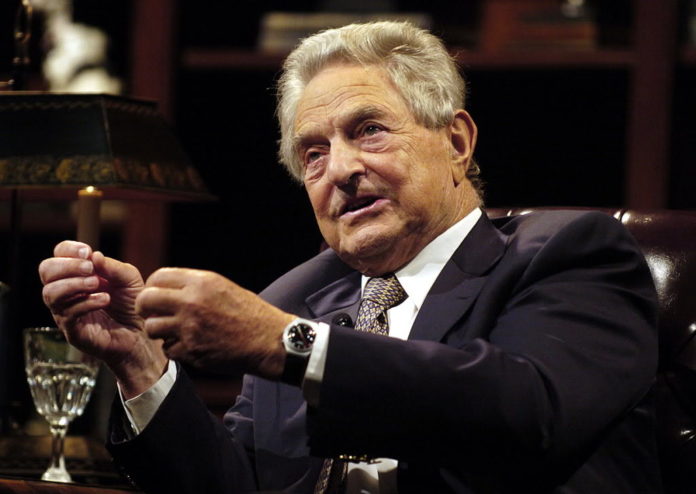 You can read part 1 here

From the BBC, Soros made a telling statement on March 4th, 2011:

“It’s very important that Europe and the US should be in front of the revolution rather than behind it because if they are behind it, they are going to lose the allegiance of the new regimes that are emerging and if they are properly supported they will be democratic regimes and it will be a tremendous improvement.”

About two weeks later on the 19th of March, bombing began in Libya.

From WND, Soros is seen funding and advocating for the ‘Global Centre for Responsibility to Protect’ that had promoted the military strategy Obama had used to justify airstrikes against Gadhafi.

“Philanthropist billionaire George Soros is a primary funder and key proponent of the global organization that promotes the military doctrine used by the Obama administration to justify the recent airstrikes targeting the regime of Moammar Gadhafi in Libya.”

He is also tied to Samantha Power, as she is a member of this group, who had been apparently instrumental in advising Obama to bomb Libya. This explains why it only took two weeks, after his speech, for policy makers in the US and NATO to launch attacks.

“The Soros-funded global group that promotes Responsibility to Protect is closely tied to Samantha Power.

Power has been a champion of the doctrine and is, herself, deeply tied to the doctrine’s founder.

According to reports, Power, who is married to Obama regulatory czar Cass Sunstein, was instrumental in convincing Obama to act against Libya.

The Responsibility to Protect doctrine has been described by its founders and proponents, including Soros, as promoting global governance while allowing the international community to penetrate a nation state’s borders under certain conditions.

The joint U.S. and international air strikes targeting Libya are widely regarded as a test of Responsibility to Protect.“

Here’s the irony: Libya now has two governments, both with their own Prime Minister, parliament and army. Libya had become a failed state; the North, rife with human trafficking; the South, a haven to terrorists; the East, run by the anti- Islamic, ‘legitimate’ government; and the West,  by the Islamic government.  In contrast, Gaddafi had turned one of the poorest African nations into one of the richest and somehow the conclusion was that Libyans were in a better place now that they had intervened.

Yes, Soros even had funds allocated to the ‘democratization’ of Ukraine… basically making any country that disagrees with Soros/America undemocratic.

Aleksandr Yefremov, the head of the Party of Regions parliamentary faction said in a televised comment that he had information that George Soros had allocated funds for the overthrow of the Ukrainian political authorities.

“I even have information that Soros has allocated certain funds in order to prepare a certain group of young boys here in Ukraine who could launch any existing projects based on the North Africa examples,” he claims. He also added that he hoped that the Ukrainian people would be wise enough not to follow such provocations.

Apparently the Ukrainian people were not very wise, because one revolution and one counter revolution later, and they are still bombing anybody in East Ukraine that believes that one needs to VOTE during an ELECTION in order to change the government. But heck, lets allow Kiev to destroy all their political opponents in the East and blame Russia for it.

“The information about George Soros’ involvement in Ukrainian politics was openly voiced by Yulia Timoshenko in 2008. Timoshenko, then the country’s prime minister, said that she was attempting to minimize the effect of the global financial crisis by following George Soros’ advice. This raised suspicions that through such advice, George Soros could influence the rate of the Ukrainian national currency in his own speculative interests. Several officials from president Yushchenko’s administration said they wanted to launch a probe into Soros’ Ukrainian activities, but it did not happen.

It was only in 2010 that the Ukrainian State Security Service started to check the activities of the Vozrozdeniye foundation, officially sponsored by Soros, and its ties with other Ukrainian NGOs, but this probe gave no feasible results.

The foundation said in a special statement that all funds allocated for Ukrainian programs are being spent on the development of the open and democratic society, and also for helping Ukrainian citizens who suffered from the effects of the international financial crisis.”

Soros has ties with a prime minister, allowing him to speculate on the currency. Her opponents kick her to the curb, wanting to probe Soros’ involvement, and are summarily ousted in violent revolution and completely silenced. What a coincidence that everything just happens to go the way Soros would have wanted… tellingly, Soros was oh-so concerned about the effects of the GFC on Ukrainians (who better to hire for your fake revolution than unemployed, desperate young men who would be grateful for your ‘assistance,’ and blame their government for the crisis), but not the complete ethnic culling of East Ukrainians.