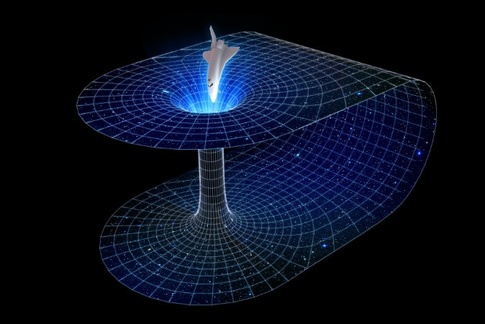 In theory, a spacecraft can potentially survive a travel through a ‘Wormhole.’ A wormhole nests directly in the center of a ‘Black hole’ floating around in space. One could pass through the wormhole in order to travel to another location in the universe, even though the tidal forces are extremely strong.

Diego Rubiera-Garcia, attending the Instituto de Astrofísica e Ciências do Espaço in Portugal, has conducted a new study along side with his team. They then published their study in the Journal of Classical and Quantum Gravity that reconsiders the genius mind of Albert Einstein’s theory. Einstein’s theory on black holes only destroys everything that is with the holes grasp.

Theorecticaly speaking, a wormhole is merely a passage way that goes through not only space, but time as well, resulting in the creation of ‘shortcuts’ for a journey across the vast emptiness of the universe.

However, this hypothetical structure was extremely unstable. With the major risk of simply collapsing on any of the particles passing through the wormhole, one would have to pass through the point of “singularity.” Singularity is when the power of forces that creates gravity are most intense, which is also often known as the end of space and time.

Rubiera-Garcia, and his team, has their analysis of what creates the destruction of the black hole, as much subtler than theorized.

“In practical terms, we dropped one assumption that holds in general relativity, but there is no a priori reason for it to hold in extensions of this theory,” Rubiera-Garcia informed Phys.org

The dedicated team has examined several various objects, such as that of an aggregation of points that are interconnected by either physical or even chemical interactions, in order to gain a better knowledge on how to hold them together in a better matter.

“Each particle of the observer follows a geodesic line determined by the gravitational field. Each geodesic feels slightly different gravitational force, but the interactions among the constituents of the body could nonetheless sustain the body,” reported by Rubiera-Garcia to Phys.org.

This new study has found that the time it takes for a single light ray to complete a round trip is consistent with any 2 nearby geodesics, and will always remain finite. And despite the ‘infinite’ spatial of the stretching that does happen, which is caused from the extreme unbounded tidal force, it still manages to remain finite. This now suggests that the curvature divergences may not be anywhere near the extreme measures in which is traditionally thought of.

“Our observer could get swallowed into the black hole, cross the wormhole throat, exit through the other side, and live to tell it regardless of the existence of infinite tidal forces,” Explains Rubiera-Garcia to CQG+.

“The emergence of wormholes and new physics beyond Einstein’s gravity may help solve longstanding puzzles and bring a happy ending to an otherwise horror story,” Rubiera-Garcia concludes.

Nearing the final months of last year, NASA has announced that they have plans for futhering the wormhole research. NASA aims to send out robots into interstellar missions within the near future.

This article (Spacecraft could Potentially Survive a Black-Hole Shortcut Across the Universe) is a free and open source. You have permission to republish this article under a Creative Commons license with attribution to the author and AnonHQ.