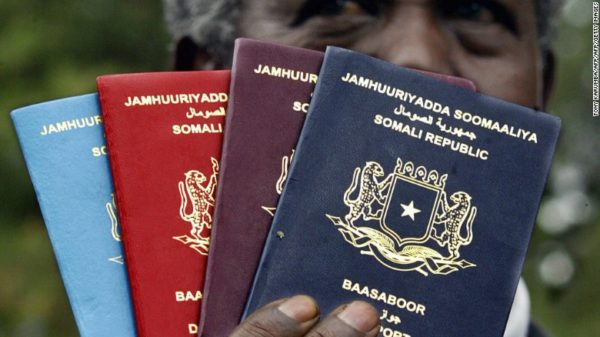 The exit of the United Kingdom from the European Union (EU) has led some observers to believe that the EU’s vision of closer integration and creating a borderless continent is under threat. Some citizens in the EU countries have called on their countries’ political leadership to follow the footsteps of the United Kingdom, to leave the Union.

However, as this confusion is rocking Europe, the continent of Africa is pursuing vision to achieve what Europe seems to be abolishing. Africa’s continental body, the African Union (AU) has announced that it has launched for the first time, a single passport for all citizens on the continent. The AU consists of 54 countries. The only country in Africa, which is not part of the Union, is Morocco. Morocco opted out of the Union after the AU recognized Western Sahara as a sovereign nation, as Morocco claimed Western Sahara is part of its territory. According to AU officials, the common passport will grant visa-free access to all 54 member states of the Union, promoting freedom of movement across the continent. This will increase trade and investment among countries in the Union.

Currently, just 13 African states are open to all African citizens without advance visas, with many placing severe restrictions on travel. Recently, the African Development Bank advised in a new report that easing entrance requirements between African nations would support economic growth. The Bank cited the case of Rwanda, which saw its Gross Domestic Product and tourism revenues climb after abolishing visas for all African nations.

The first kind of the passport was issued to heads of state and senior AU officials at the July AU summit, which was held in the Rwandan capital, Kigali. The Union aimed that by the end of 2018, all African citizens will be issued with the passport. The Union said in a statement that “This flagship project has the specific aim of facilitating free movement of persons, goods and services around the continent – in order to foster intra-Africa trade, integration and socio-economic development.”

According to the Union, the all-African passport represents a key plank of the Agenda 2063 action plan, which emphasizes the need for greater continental integration, based on the vision of the parent organization of the AU called the Organization of African Unity (OAU).

Rwanda’s Foreign Affairs Minister, Louise Mushikiwabo said the issuance of the passport was one of the African strategic initiatives to disband all movement restrictions, which will create an environment to boost inter-African trade. Ms Mushikiwabo said at a news conference “Rwanda is ready for the AU Passport issuance. Other countries will also be working towards implementation of this decision. The free movement of people in Africa will spur our economic growth.”

A senior research fellow at the Institute for Security Studies, David Zounmenou told CNN in an interview that the common passports will support international trade within the African continent, reducing the widespread dependence on Western goods, and offer new opportunities to many citizens.

“Many people ask ‘what are the practical benefits of being a member of the AU?’ This can be one of the most important social and economic responses, which allows business to flow, students to travel, and people to move from one corner of the continent to another,” Mr Zounmenou said. The AU was founded on May 26, 2001 in Addis Ababa, Ethiopia, from its parent OAU. The slain Libyan leader, Muammar Gaddafi is credited for founding the modern AU. He dedicated the majority of his lifetime ensuring that the continent would have a union government and a single currency in future. He was also a major financier of the Union. His death has become a big blow to the Union.

This article (Step Towards United States of Africa: AU Launches All-Africa Passport to Create a Borderless Continent) is a free and open source. You have permission to republish this article under a Creative Commons license with attribution to the author and AnonHQ.com.