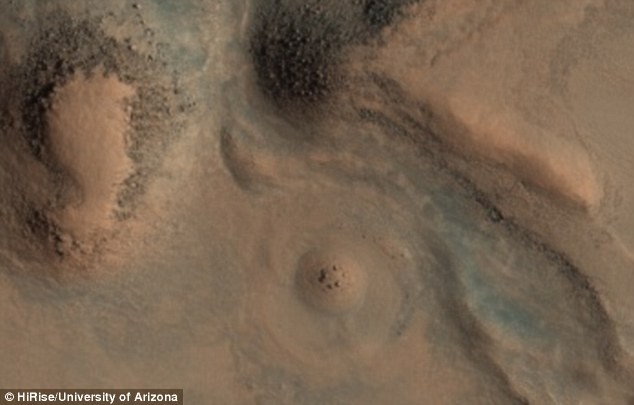 To think that ancient life on Mars built monuments, similar to ancient humans on Earth…  As we are constantly uncovering news about the red planet, including flowing water on the surface and the past existence of a giant ocean 2/3 the size of Earth’s northern hemisphere, life and intelligence seems that much more real.

Did Martian creatures built monuments millions of years ago.  Was there life on Mars before life on Earth?

Some sort of explosion seems to have littered the planet’s surface with iron and volcanic rock, possibly induced by a planetary collision.  The iron has oxidized and turned red, either from millions of years of exposure to the oxygen or from rain.

Before the cataclysm, what thrived?

Alien hunters claim to have located a possible monument, similar to the circle of stones on Earth known as Stonehenge. The images, sent back by a spacecraft orbiting the planet, reveal a circular set of stones, though experts have stated that it could have been caused by natural events.  The freeze-thaw cycle of permafrost can cause sediment to churn and separate by grain size that can cause boulders or large rocks to produce stone circles or polygons on low slopes. There are so many distant images beamed back from Mars and it is acknowledged that it is a stretch to assume anything without examining the material up close.  It could just be a random set of stones.  The pyramid structures we see could be a result of erosion, or optical illusion.

We do know that there is water flowing, and likely microbial life as we speak, but did creatures land on the planet in ages past?