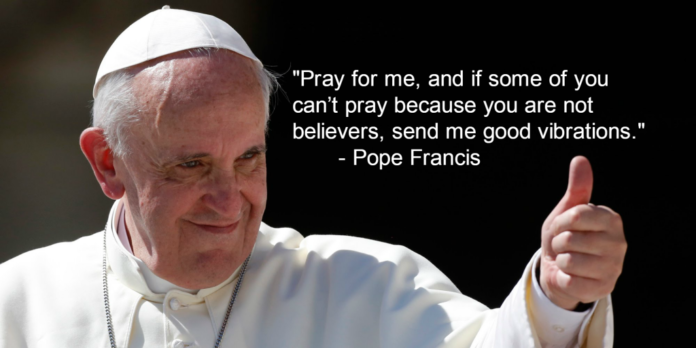 Since the past couple of months [post January 20, 2017 to be more precise], Pope Francis has been vocal about the importance of addressing climate change. He has also declared that science is necessary if we are to save the planet; has promoted the full participation of indigenous people in local and national government; and has warned against the rise of white nationalism and populist leaders like Adolf Hitler.

No prizes for guessing where it is coming from and where it is going: Donald Trump, a friend and ally of the oil and gas industry, denies climate change, is picking a fight with science (including the EPA), rarely acknowledges Native Americans, and shares an unprecedentedly disturbing courtship with the racist white nationalist movement.

Recently, Pope Francis suggested it was better to be an atheist than one of many hypocritical Catholics. If you’re a Christian who exploits people, leads a double life, or manages a “dirty” business, perhaps it’s better not to call yourself a believer, the head of the 1.2 billion-member Roman Catholic Church said in a homily on February 23, in Rome.

“There are many Catholics who are like this and they cause scandal. How many times have we heard – all of us, around the neighborhood and elsewhere – people say: But to be a Catholic like that, it is better to be an atheist.

“In the Catholic Church, causing scandal is also a grave offense. It is that: scandal. But what is scandal? Scandal is saying one thing and doing another. That is a double life. Examples of such sins abound: from money launderers to business owners who take beach vacations while stiffing their employees.

“There are those who say: ‘I am very Catholic, I always go to mass, I belong to this and that association’. Some of these people should also say: ‘My life is not Christian, I don’t pay my employees proper salaries, I exploit people, I do dirty business, I launder money, I lead a double life’.”

Of all the inconvenient news, *this* is the one Conservative Christians will wish to dismiss as “FAKE NEWS” the most https://t.co/vUrZBdMrim

Although the recent criticism was aimed at some members of his own church, it can also been seen as attacking Donald Trump who, Pope Francis implied last year, is not a Christian, saying, “[he] who thinks only about building walls, wherever they may be, and not building bridges, is not a Christian.”

This isn’t the first time Pope Francis has targeted Christian hypocrites. In a sermon last February, he “reflected on God’s reality and the ‘fakeness’ of so many Christians who treat the faith as though it were window dressing – devoid of obligation – or an occasion for aggrandizement rather than an opportunity for service, especially to our neediest neighbors.”

Pope Francis all but says Trump is a “bad” Christian.
@CNN https://t.co/6JFJZx2BDM

This isn’t the first time Pope Francis has mentioned atheists, either. In 2013, he said heaven is open, potentially, to all people.

This article (Pope Francis: Better to Be an Atheist than a Hypocritical Catholic) is a free and open source. You have permission to republish this article under a Creative Commons license with attribution to the author and AnonHQ.com.