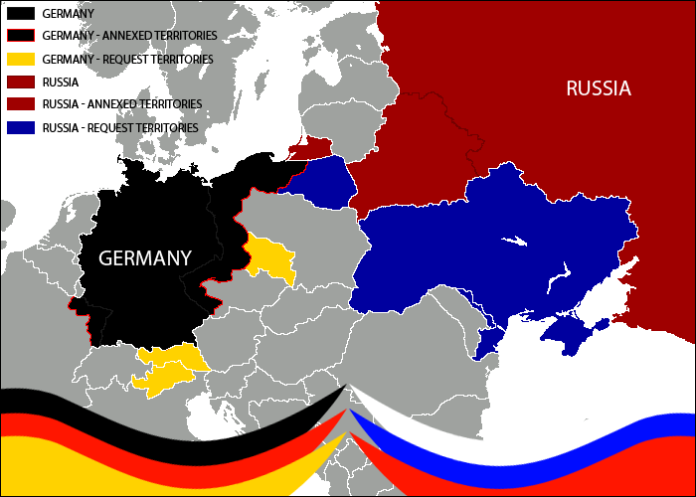 In this video, STRATFOR (short for Strategic Forecasting Inc., an organisation which advises Bank of America, the US State Department, Apple, Microsoft and Lockheed Martin, Monsanto and Cisco on “security matters”) founder and chairman George Friedman gives a lecture at The Chicago Council on Global Affairs explaining the background for the crisis that is ongoing in Ukraine. The man is intimate with the military, having advised and  regularly briefed senior commanders in the armed services as well as the Office of Net Assessments, SHAPE Technical Center, the U.S. Army War College, National Defense University and the RAND Corporation, on security and national defense matters.

“No place is really Pacific for very long, I mean here in the United States we have constant wars,” begins Friedman. Pacific in this context means “peaceful”. “Europe will, I suspect, not return to the 31 years, but it will return to humanity. They will have their wars, they will have their peace, they will live their lives” he continues, referring to Europe’s Thirty Years’ War, which had been a period of immense inter-European conflict. “It will not be a hundred million dead, but the idea of European exceptionalism is suffering the first death. There will be conflict,”

On answering a question regarding the threat of Islamic fundamentalism, he answers that “it is a problem to the United States, it is not an existential threat…. We have other foreign policy interests….. The primordial interest of the United States over which we have fought wars, the First, Second and Cold Wars has been the relationship between Germany and Russia, because united they are the only force that could threaten us, and to make sure that that does not happen”

“If you are Ukrainian, you should essentially reach out to the only country that will help you, which is the United States.” He explains that US General Hodges, commander of the US army in Europe, had taken the unprecedented measure of going to Ukraine to announce that US trainers would be official on their way….. And then pinned medals on the chests of Ukrainian fighters. This is against military protocol, because technically foreigners do not get to receive American medals meant for American troops. But were they really foreign troops, when by any definition they were serving American interests? “Foreigners don’t get to pin on medals….but he did, showing that this was his army. He then left, and ….announced that the United States would be pre-positioning armor, artillery and other equipment in the Baltics, Poland, Romania and Bulgaria”

“In all of this, the US has acted outside of NATO,” in order to circumvent the need to accede to a mandatory vote…. If even ONE NATO member votes against an action, it is vetoed. The US is more than willing to implement a “Cordon Sanitaire” around Russia, or a containment region around it where Russia has no sphere of influence.

“Russia knows it, Russia believes that the United States intends to break the Russian Federation”.

“The United States has a fundamental interest. It controls all the oceans in the world. No power has ever done that. Because of that we get to invade other people, and they don’t get to invade us,” maintaining this iron grip on the airspace and oceans is the foundation of its power, “The best way to defeat an enemy fleet…Is to not let it be built”. Drawing on British historical imperialism, he points out that Britain had prevented its neighbors from building a fleet by making certain that they were always at war with one another…. And with regards to Iran and Iraq, America had kept the drums of war going by funding both sides of the conflict.

He highlights that this policy was effective, as the US lacked the man-power to occupy the region, constant war would weaken its potential rivals….While it appeared to be the best friend of both nations. Political, economic and milltary support as well as so-called “advisors” would be supplied to the various factions, rather than attempting to overwhelm them with brute force.

He views America’s grandiose plan of establishing a democracy in Iraq “psychotic”, but believes that funding two sides in an eternal war costing millions of lives is a credible strategy. As with Britain, he believes that the US should not occupy; the British had turned various sates in India against one –another, allowing them to colonize a much larger population… Divide and conquer works on rivals AND potential impoverished slaves it seems.

Germany remains the wildcard in the Ukrainian conflict however; the US has an interest in preventing Ukraine from being influenced by Russia, because through Ukraine it could influence Europe. On the other hand, Russia views the presence of US in Ukraine, a short distance from Stalingrad and not much further to Moscow, as an existential threat. Germany however is in a strange position; its former chancellor was on the board of directors for Gazprom.

He concludes that the US’s only fear is German technology and capital inter-marrying with Russian natural resources and man-power, and thus the US is keen on constructing this buffer zone between the Baltic Sea and the Black Sea, that would insulate Germany from Russian influence.

Forget about supporting “democracy” in democratic in Ukraine. Forget about Russian “aggression” proven only on the halls of Facebook and Twitter. Forget the bloodless annexation of Crimea. From the horse’s mouth, we have the real reason for Ukraine as it is today:

To keep Germany away from Russia, and hopefully prevent the relentless decline of America as the only world empire ever known in past history.