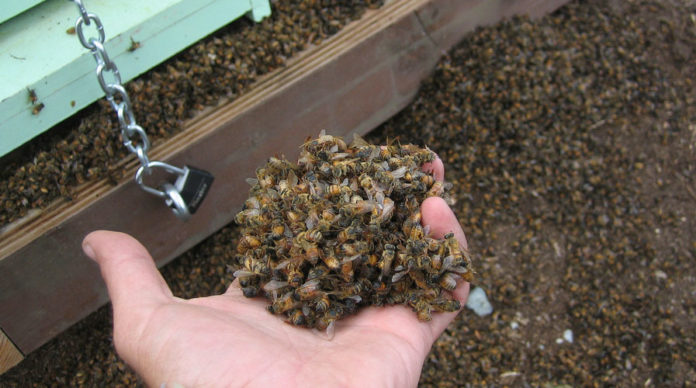 347 bee species in North America and Hawaii are “spiraling towards extinction,” two new studies have shown. According to the reports, more than 700 of the 4,000 native bee species in the regions are at significant risk due to increased pesticide use, which is destroying the bee’s habitats.

As part of one of the studies, entitled ‘Pollinators in Peril: A systematic status review of North American and Hawaiian native bees‘, the Center for Biological Diversity monitored 4,337 native species in an effort to determine how bee populations are faring against worsening threats such as pesticide use, climate change and urbanization. The organization found that as many as 749 of the 1,437 species, for which there was sufficient data to evaluate, were in decline.

The status of 316 of the bee species were reviewed by the center, while all available information was used to determine the health of the remaining 1,121. Due to the troubling findings, the center has presumed the species, which lacked sufficient data, are also at risk of extinction.

While bee populations in Europe have been frequently evaluated over recent years, data relating to the health of wild bees in North America has been lacking. These two studies have therefore revealed the severity of the situation on the continent, providing an insight into what needs to be done to save these essential pollinators from extinction.

“The evidence is overwhelming that hundreds of the native bees we depend on for ecosystem stability, as well as pollination services worth billions of dollars, are spiraling toward extinction,” Kelsey Kopec, pollinator researcher at the Center for Biological Diversity and author of the study, told EcoWatch. “It’s a quiet but staggering crisis unfolding right under our noses that illuminates the unacceptably high cost of our careless addiction to pesticides and monoculture farming.”

A second study, which was published around the same time, by the Intergovernmental Science-Policy Platform on Biodiversity and Ecosystem Services (IPBES) showed similar results. However, while both of these studies reveal that the current situation is severe, there may still be hope. IPBES concluded that while human influence is having a devastating effect to bee populations, if the appropriate action is taken, the bees can be saved.

“The data compiled in this report offers a snapshot of magnitude of threats native bee species face and the extent of their decline,” concludes the Center for Biological Diversity analysis. “These findings are in line with those found globally and demonstrate the necessity of more research to fill the data gaps. But what we already know is troubling and should inspire us to act: 24 percent of data sufficient native bees are imperiled, and 52 percent show population declines. We need to take aggressive steps to better understand and protect our precious bee species before it is too late.” At this moment in time, neonicotinoid insecticides – the world’s most widely used insecticides – is in the process of being banned in Europe, according to the Guardian. In 2013, three of the insecticides were temporarily banned. However, in the United States, similar actions have yet to be taken.

“The assessment found that pesticides, including neonicotinoid insecticides, threaten pollinators worldwide, although the long-term effects are still unknown,” the Food and Agriculture Organization of the United Nations (FAO) pointed out in a press release earlier this year. “A pioneering study conducted in farm fields showed that one neonicotinoid insecticide had a negative effect on wild bees, but the effect on managed honeybees was less clear.”

There are more than 20,000 species of wild bees alone. Their populations, in combination with the many species of butterflies, flies, moths, wasps, beetles, birds and bats are responsible for pollination.

The Gulf Coast solitary bee, the macropis cuckoo bee and the sunflower leafcutting bee were listed among the species that are severely threatened. In February, the rusty patched bumble bee became the first wild bee in North America to be listed by federal authorities as endangered.

Bees are responsible for pollinating approximately 400 different agricultural types of plant. It is estimated that this amounts to more than $3 billion in fruit-pollination services each year in the US alone. With the population and the demand for crops increasing, healthy wild bee populations could determine our future.

“We’re on the verge of losing hundreds of native bee species in the United States if we don’t act to save them,” said Kopec, whom EcoWatch notes spent a full year analyzing collected data. “Almost 90 percent of wild plants are dependent on insect pollination. If we don’t act to save these remarkable creatures, our world will be a less colorful and more lonesome place.”

This article (Studies Reveal 347 Bee Species at Risk of Extinction in North America and Hawaii) is a free and open source. You have permission to republish this article under a Creative Commons license with attribution to the author and AnonHQ.com.