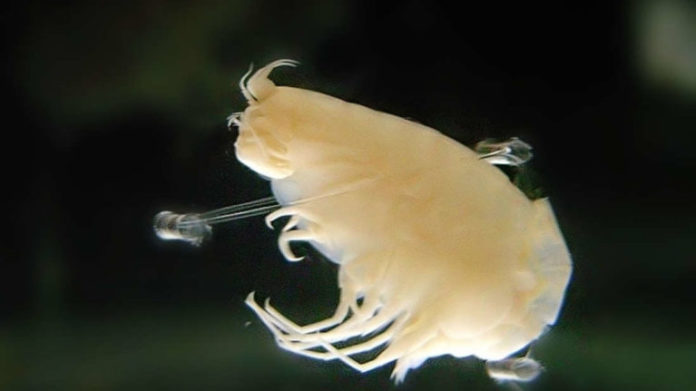 The chemical pollution was found in animals 6 miles below sea level.

Recent studies have revealed that crustaceans that live 10 kilometers (6 miles) below sea level are carrying high levels of harmful industrial chemicals from human-caused pollution. Though there have been many missions to the deepest parts of the oceans in the past, most of the Mariana and Kermadec trenches, where these polluted creatures were found, have never been visited by any humans, or even machines. In contrast to the expected excitement of exploring parts of the ocean’s deepest trenches that many would expect, researchers were thoroughly shocked by what they found.

Dr. Alan Jamieson from the University of Aberdeen conducted his research by collecting amphipod crustaceans from 7,227-10,250 meters (4.5-6.4 miles) deep into the ocean, with the use of traps that were set by deep-sea landers. Polychlorinated biphenyls (PCBs) and polybrominated diphenyl ethers (PBDEs) were found in every sample tested, across three different species. PCBs and PBDEs are both examples of persistent organic pollutants, which are chemicals that are produced by humans and disrupt the functioning of hormones in animals. They can also be found in the bodies of the predators that eat the prey, as they build up inside their bodies with lower concentrations. This process is known as bioaccumulation.

PBDEs are commonly used as flame retardants, despite their production now being restricted. The European Union and California, amongst others, have banned some of the production of PBDE, although it is still relatively common. Dr. Jamieson reported in Nature Ecology and Evolution that there were extremely high concentrations of PCBs found in the crustaceans from the Mariana Trench, which in some cases were as high as 905 parts per billion (ppb). In addition to this, and perhaps the most concerning, even samples that were retrieved from the deepest part of the ocean that was examined were found to have a concentration of 250 ppb dry weight. The scientific paper says, “In the Mariana, the highest levels of PCBs were fifty times more contaminated than crabs from paddy fields fed by the Liaohe River, one of the most polluted rivers in China.”

Although the reports have stated that the source of these harmful chemicals is unclear at the moment, some have suggested that it may be coming from POPs sinking when plastic in Great Pacific Garbage patch has degraded. In addition to this, the Kermadec Trench, located in the South Pacific, is one of the Earth’s most remote places, away from sources of industrial pollution. PCB levels found here were far lower than in the Mariana trench, however, the PBDE concentrations were actually higher in the Kermadec compared to the Mariana Trench. Despite the shocking levels of chemical pollutions deep in the untouched ocean, these levels are still seen as relatively low compared to those in more coastal waters.

The affect that these PCB levels will have on the life in the depths of the ocean is currently unknown, as is the answer to the vital question of how long they will last. However, it can be gathered from these recent reports that the Anthropocene – described as a new geological age which is caused as a result of mankind’s polluting activities – is covering the entire planet.

This article (Studies Reveal That Deep Sea Animals Are Full Of Harmful Pollutants) is free and open source. You have permission to republish this article under a Creative Commons license with attribution to the author and TrueActivist.com