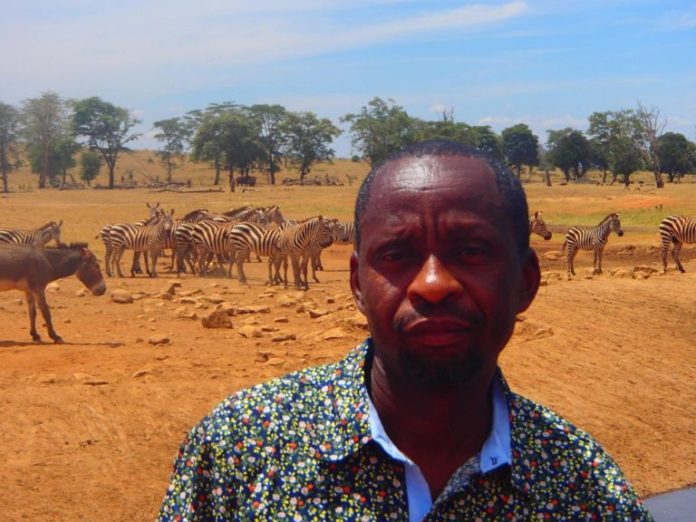 “There is completely no water, so the animals are depending on humans. If we don’t help them, they will die.”

Both people and wildlife have been adversely affected by a looming drought in Kenya, Africa. Approximately 1.3 million Kenyans are in need of food aid and support, and some have adopted ‘extreme’ tactics to keep themselves and the livestock they look after alive. For example, some farmers have begun feeding their meals to wildlife to ensure they don’t die from dehydration or starvation.

An individual helping to ensure that wildlife such as elephants, buffalo, antelope, and zebras make it through the trying times in Patrick Kilonzo Mwalua. Every day, the activist spends hours driving a precious resource to animals at Tsavo West National Park.  In one trip, Mwalua can transport 3,000 gallons of fresh water to the creatures in need, and he receives plenty of fanfare from the animals for his actions. He told The Dodo:

“There is completely no water, so the animals are depending on humans. If we don’t help them, they will die.”

To fill bone-dry watering holes in the region, Mwalua must devote hours of his day to the task. Many of the holes themselves – which are lined with concrete – need cleaning (the activist blames it on buffalo droppings). And sometimes, he will just fill cracks in the Earth with water so the animals can roll around and ‘bathe’ in the fresh offering.

“The buffalo roll in the mud so they suffocate the fleas and ticks,” he says.

Because Mwalua is dedicated to helping the animals, some have begun to trust him and even eagerly await his arrival. He told The Dodo:

“Last night, I found 500 buffalo waiting at the water hole. When I arrived they could smell the water. The buffalo were so keen and coming close to us.”

“They started drinking water while I was standing there. They get so excited,” he added. According to reports, Kenya has been suffering from an extreme drought since 2014. Mwalua, who works as a pea farmer in his local village, witnessed first-hand the suffering that was mounting due to the dry weather. Seeing animals die of thirst solidified his decision to care for them by transporting the life-saving resource to water holes.

“We aren’t really receiving rain the way we used to,” he says. “From last year, from June, there was no rain completely. So I started giving animals water because I thought, ‘If I don’t do that, they will die.’” The 41-year-old also runs a conservation project called Tsavo Volunteers when he’s not farming or transporting water to gigantic beasts in need. He also spends time educating the younger generation about the importance of caring for wildlife.

“I was born around here and grew up with wildlife and got a lot of passion about wildlife,” he says. “I decided to bring awareness to this so when they grow up they can protect their wildlife.” Fortunately, Mwalua is not alone in his efforts. Three women in the United States – who have never met the good samaritan or each other – are helping to fund the projects he manages. One of the women, Angie Brown, elaborated:

“I visited Kenya December of 2015, though I didn’t know Patrick at the time or meet him.”

After learning of the animals’ plight, she was concerned and felt ready to do something. Brown connected with fellow activists Cher Callaway and Tami Calliope on Facebook and the trio decided to help. Callaway set up a GoFundMe page to support Mwalua’s efforts and it has already raised more than $18,000. They started a movement, and now people around the world have the opportunity to help keep wildlife alive in the thirsty region. “We have all spent a lot of time getting the word out about the animals Patrick is helping and the GoFundMe has been a real success. He needs so much more money though.”

One goal of theirs is to purchase Mwalua a truck. If you’re interested in learning more or helping, please visit the GoFundMe campaign.

“His commitment to the wildlife and his heritage is unmeasurable,” says Callaway. ”Even risking his own life in the middle of the night to deliver water to a dry water hole.”

This article (Activist Spends Hours Each Day Driving Water To Animals In Drought-Stricken Kenya) is free and open source. You have permission to republish this article under a Creative Commons license with attribution to the author and TrueActivist.com