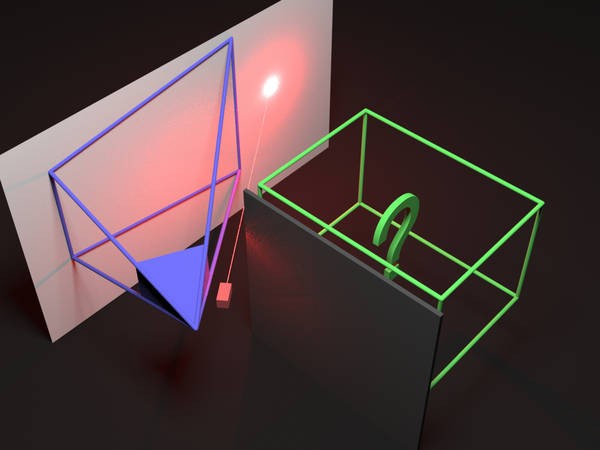 Ha! I will finally be able to catch whomever is stealing my cookies! And they will never know I am there!

Yes, another new concept of “I spy” technology is in the works. Lasers , lasers, lasers… it’s not really a new technology. They are used for everything from scanning your groceries for price to projecting holographic images to destroying missiles midair. Video games have used laser imaging for years. NOW we want to see you without seeing you. Everyone from perverts to 007 can benefit from this one (insert evil smirk here). Prof. Matthias Hullin from the Institute of Computer Science II at the University of Bonn

The process of the technology is relatively simple. We can use sonar as a loose reference for now. SONAR (SOund Navigation And Ranging) sends out a “ping” which is kind of like a powerful musical note through water. When it hits something the ping is reflected back to the source. A fancy hi tech computer measures exactly how long it takes for that ping to go out and come back, does some really fast arithmetic and spits out how far away that object is.  Got it?  Direct Laser imaging works roughly the same way. The laser obviously moves a heck of a lot faster. So fast in fact, that it can be pulsed at a high enough rate to create 3d pictures. This particular piece of apparatus whips out diffused laser beams (beams that are spread apart), bounces them off a wall, a window or something, and around a corner. Now the tricky part; the little camera-computer still measures the time the beams take to come back but, also figures out the angles they come back at, reflectivity and a bunch of other parameters to build a picture of what’s behind door number one. Oh… as long as whatever the laser is being shot at actually bounces off of the object in question.

Benefits? Detriments? Take your pick, there’s a good pile of both if you overwork a conspiracy theorist’s mind. If a compact portable version i.e. “helmet mounted” is ever perfected it would save the lives of law enforcement officers, soldiers in urban combat, or even a basic defense against creepers in dark parking garages. At the same time?  If a compact portable version i.e. “helmet mounted” is ever perfected? Once again there is another strand of rope around the sheep’s throat. You know darn well it won’t be for hunting aliens. I see this whole project as yet another step toward the demise of freedom.  Can you imagine a fleet or mini gyro-copter drones with this technology? Maybe little hockey puck robots that the law turns loose when they are searching for someone… I think I saw that in a couple movies. You wouldn’t be safe taking a pee with the curtain open. So, how does THIS benefit the world again?