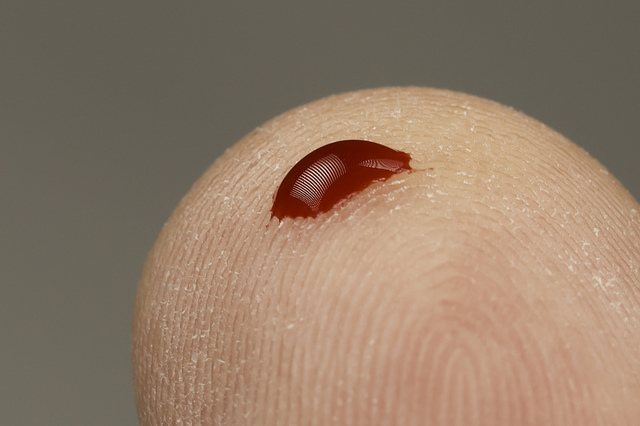 Researchers at the United Kingdom’s Swansea University Medical School have developed a simple blood test that can help doctors detect cancer in undiagnosed, at-risk or asymptomatic patients, a decade before actual symptoms of the killer disease start to appear. Since early detection of cancer is a key factor in successful treatment and survival rates, researchers are calling the new breakthrough a “smoke detector” that has the potential to save millions of lives.

The £35 test, which takes a few hours with standard laboratory equipment, detects mutations in proteins on the surface of red blood cells. In healthy people, the number of such mutations averages about five per million, but in cancer patients there can be 50 to 100 mutants per million.  Professor Gareth Jenkins, who led the research, explains:

“The test detects changes, known as mutations, in red blood cell surface proteins. These sugary proteins act as “Velcro” to stick cell recognition proteins to the cell surface. In mutated cells, the “Velcro” is missing and so the cells are “naked” for the protein of interest. Staining cells with fluorescent antibodies for the cell recognition proteins identifies normal from mutated cells which allows a mutant cell frequency to be calculated per person.

“The test can be likened to a “cancer smoke detector” because a smoke detector does not detect the presence of fire in our homes but its by-product – smoke. This test detects cancer, by detecting the “smoke” – the mutated blood cells. The old adage of no smoke without fire also applies to “no cancer without mutation”, as mutation is the main driving force for cancer development.”

A new blood test has been developed that could detect cancer earlier than ever before > https://t.co/mBVjXuIxIL pic.twitter.com/xBIkDqFfCz

According to The Telegraph, Professor Jenkins’ team chose oesophageal cancer for the trial because of its woeful survival rates: the median survival time is just 12 months, while just 15% cent of people live for five years. “The problem is that it doesn’t present itself at an early stage, and most cases are diagnosed when they are far more advanced.”

Professor Jenkins told the audience at the British Science Festival that the “cancer smoke detector” is currently undergoing trials of detecting pancreatic cancer, as they needed to find evidence that it would work for other cancers.

“It would be really difficult to think why it would only affect oesophageal cancer. With any cancer, if it is caught early enough and surgically removed, that is the biggest impact you can have on the outcome of a cancer diagnosis. I would think it would have a massive effect.”

Swansea researchers believe this new blood test will allow people to take preemptive action before the cancer shows up in the body. This will not only prevent cancer, it will also eliminate the need for expensive chemotherapy and radiation if detected early. Therefore, the team of researchers is now carrying out a validation study to check that the test does not throw up too many false positives, or miss cancer. Dr Aine McCarthy, senior science information officer at Cancer Research UK, observes:

“Finding new ways to detect cancer early – especially cancers that are hard to treat like oesophageal cancer – is vital to improve survival. That’s why studies like this, which used blood samples to detect background DNA damage as a sign of cancer, are exciting because they could lead to more oesophageal cancers being diagnosed in the early stages. But larger scale studies are needed to confirm the results and show the test is reliable before it can be used in the clinic.”

In May 2015, researchers at Harvard and Northwestern University developed a cancer test that could predict with 100% accuracy, whether someone will develop cancer up to 13 years before diagnosis. In December 2012, a 15-year old teenager at Johns Hopkins University invented a paper sensor that could detect pancreatic, ovarian and lung cancer in their earliest stages in 5 minutes, for as little as 3 cents. The test, he claims, is 168 times faster, 26,000 times less expensive, and 400 times more sensitive than current testing methods.

This article (Swansea Develops Low-Cost Blood Test to Detect Cancer 10 Years Before Symptoms Appear) is a free and open source. You have permission to republish this article under a Creative Commons license with attribution to the author and AnonHQ.com.