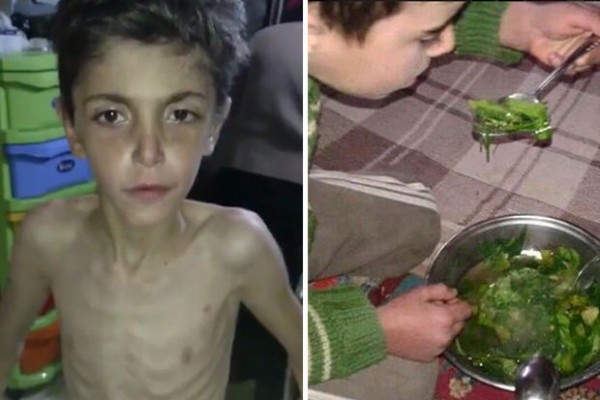 Last week, reports revealed that residents of the Syrian town of Madaya, were eating grass and leaves in order to survive. In response to this news, International aid agencies led by the United Nations (UN) have brought food aid to the Syrian town. The food shortage was caused by a blockade that was created by government and rebels forces fighting for control in the area.

The UN and the International Committee of the Red Cross confirmed that trucks carrying food and medical supplies have reached Madaya near the Lebanese border, and distributions have started in order to save lives.

Over the past few days, a number of disturbing images and videos from the staving town have appeared on social media. The image of a very malnourished child crying, the corpse of a skeletal man, and a woman cooking grass in boiling water as a source of food, have been shared on social media. Residents living on the outskirts of the town, have also told Reuters that they wanted to leave the town due to widespread hunger, but heavy bombardments have prevented their escape. Prices of basic foodstuffs have soared, and some people are reportedly living on saltwater.

Madaya is about 15km northwest of the capital, Damascus, close to the Lebanese border. Some 42,000 are said to be living in the town. The civil war in the country has badly affected the town. In their fight against the rebels, Syrian government troops have besieged the town for some months now.

Reuters reports that the siege began six months ago, when the Syrian army and its Lebanese ally, Hezbollah, started a campaign to re-establish President Assad’s control over areas along the Syrian-Lebanese border. The last time Madaya received food aid was back in mid-October. Civilians who have tried to flee the town, were reportedly killed. Therefore, residents were forced to stay in the town and starve to death.

The UN has said it has “credible” reports of people starving to death and being killed when trying to leave the town.

On Monday, aid convoys loaded with food and other relieve items, finally arrived in Madaya. The convoys are part of a deal between the government and rebels to let supplies into besieged areas of the country. After arriving in the town, the UN’s World Food Programme, the International Red Cross, and the Syrian Arab Red Crescent testified that the situation is very disturbing, confirming the social media content that prompted the aid delivery.

The World Food Programme said the aid carried on the Madaya convoy will meet the needs of the 42,000 people; however, the supplies are only expected to last for one month.

“The children look so weak and fragile” — #WFP team on the ground in #Madaya as it works to get vital #food offloaded.

Abou Ammar, a media activist in Madaya who helped post some of the images on social media, told Al Jazeera in a phone interview: “We have all been eagerly waiting since 5am. The situation here is getting worse and it’s about time this operation goes through.”

He also disclosed that one person died of starvation just few hours before the aid convoys arrived in the town. After assessing the situation in the town, the aid organizations and activists expressed sad feelings on Twitter. Doctors Without Borders (MSF) have said that at least 28 people, including six babies under one year of age, have died from hunger-related causes in Madaya.

MSF also said they have identified 250 people with severe acute malnutrition, including 10 patients who are in immediate need of lifesaving hospitalization.

Unfortunately, the town of Madaya is not alone in its struggles; there are other areas, such as Foua and Kefraya, which are also under siege in Syria. The International Committee of the Red Cross estimates that some 12 million people in Syria are in dire need of aid. The organization is therefore soliciting for support from individuals and benevolent organizations. You can click here to support the campaign with the little you have.

#Madaya “Crowds of hungry kids around. It’s heartbreaking to see so many hungry people.” – sms to me from UNHCR’s Sajjad Malik #Syria

The Syrian civil war began in the early spring of 2011. It was a nationwide protest against President Bashar al-Assad’s government; however, it soon degenerated into an armed conflict, with rebel forces vowing to remove Assad from power. It has been estimated that between 140,000 and 350,000 people have died so far from the conflict. In March 2015, Al Jazeera estimated that some 10.9 million Syrians—almost half the population—have been displaced, and 3.8 million have been made refugees in other countries.

This Article (Syria Finally Allows Food Aid To Reach Town Where Residents Are Eating Grass and Leaves To Survive) is free and open source. You have permission to republish this article under a Creative Commons license with attribution to the author and AnonHQ.com