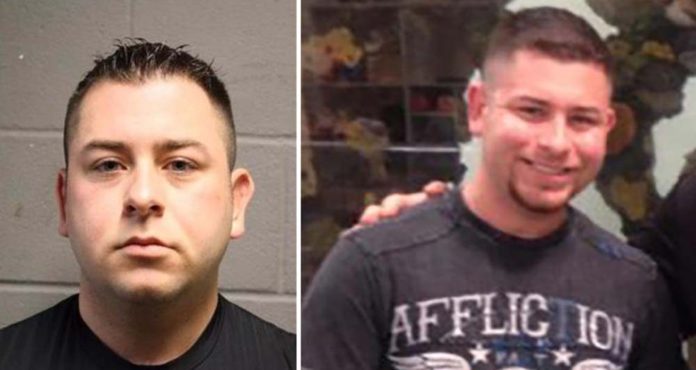 Just when you think the police can’t sink lower, a Texas cop proved our thoughts to be wrong. Houston Deputy Andrew C. Sustaita was arrested after his bosses at the Harris County Sheriff’s office discovered he used one of their computers to upload a homemade bestiality video. Sustaita is accused of having sex with a dog, filming it, and then uploading the video using county servers. The Sheriff’s Office attempted to keep it under wraps, however the District Attorney released the details of Sustaita’s crimes.

Sustaita was no rookie. He had been with the Sheriff’s Office for six years. He came from a family of cops. Sustaita had been identified as a suspect during an investigation by the Sheriff’s Office, who were establishing the video’s appearance on Harris County servers. They determined that its point of origin was a Harris County computer. It is unclear how many videos were uploaded, however it appears that Sustaita had created more than one.

“The allegation involves production of obscene material that includes sexual contact with a dog,” a Harris County Spokesman for the DA stated in a press release. As usual, family and friends of Sustaita are devastated. Of course, no one who knew him could see this coming, as police tend to hide misconduct on a sociopathic level. The Sheriff released a statement distancing himself from Sustaita and the incident. “The possession of obscene and illicit material is made even more troubling when a Sheriff’s Office employee is found to be involved,” stated Sheriff of Harris County, Ed Gonzalez. “Every resource of this office will be dedicated to protecting the public and holding our employees accountable for wrongdoing.”

This article (Texas Cop Arrested for Having Sex with a Dog on Video) is a free and open source. You have permission to republish this article under a Creative Commons license with attribution to the author and AnonHQ.com.