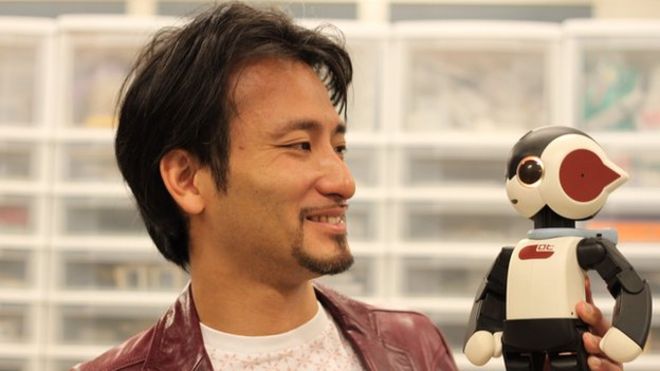 Tomotaka Takahashi, Japan’s leading robot scientists who created Kirobo – the world’s first talking robot sent to space to keep astronauts company, is now making the world’s first humanoid Smartphone – a Internet-enabled pocket-sized smart robot with all the features of Siri, designed to look, act, and feel like a human being.

Tomotaka, who bases his designs roughly off Astroboy, the pint-sized superhero of 60s Japanese manga, elaborates, “The new robot is a phone, sold as a phone from a phone company. It is a little bigger than the iPhone 6 Plus. We would like it to be a major hardware platform, just like Nintendo or iPhone. The pocket robot will have a similar battery life and cost about $2,000.”

“The pocket robot has a head and limbs, is able to walk and dance, and expresses emotions through gestures and color-changing eyes. You will put him in your pocket and talk to him like your own Jiminy Cricket. By collecting data about your online and offline behavior, your pocket robot would “get to know you”. In fact, its personality would change based on your personality,” adds Tomotaka, CEO of robot design company Robo Garage.

In addition to experiences, you could also share thoughts and feelings with your robot. “Right now, we can talk to our phone to ask for our schedule or send an email, but that’s more of a direction. When we have small robots, we’ll say things to it like ‘Today’s cold’ or ‘I’m sad’ – things more related to our fundamental emotions. He doesn’t have to say something very useful back. Just respond like a human would,” he tells The Huffington Post.

You could use your pocket robot for lots of other things too. “If you tell your robot you’re hungry, it could remind you when you last ate, or tell you that around the corner, there’s a sushi place (which your robot would know is your favorite type of food). Your robot could also help you better connect with humans. For example, if you’re about to meet a new co-worker, your robot could – after scanning the Internet or that person’s robot – tell you that the new co-worker shares a hobby with you,” Tomotaka explains.

“My dream is to become the Steve Jobs of robotics. He invented a whole lifestyle via his gadgets. And I have the same objective – I want everyone to use communication robots in their daily life,” he wrote in an article for BBC.

Tomotaka’s smart machines have been awarded multiple Guinness World Records, including the longest distance covered by a battery-operated remote-controlled model car, the first companion robot in space, and the highest altitude for a robot to have a conversation.

This Article (Thanks To This Man, Pocket-Sized Smart Robot Could Soon Replace Your Smartphone) is free and open source. You have permission to republish this article under a Creative Commons license with attribution to the author and AnonHQ.com.