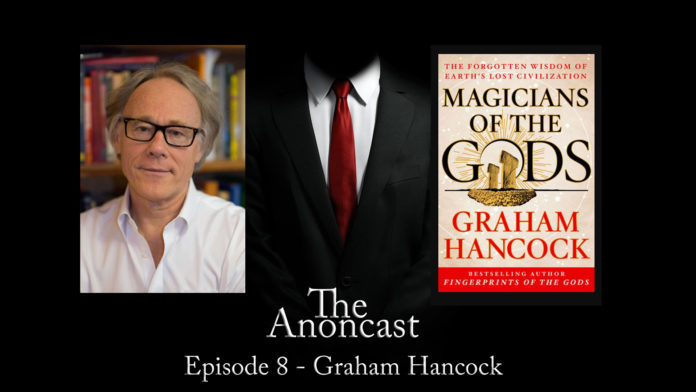 On this episode of The Anoncast, Alek talks with Graham Hancock about his new book titled Magicians Of The Gods.  Graham provided insight into the great catastrophic event which ended a once great civilization and gave birth to the modern era of civilization some 12,800 years ago.

GRAHAM HANCOCK is the author of Magicians of the Gods, and of the major international bestsellers The Sign and The Seal, Fingerprints of the Gods, and Heaven’s Mirror. His books have sold more than five million copies worldwide and have been translated into 27 languages. His public lectures, radio and TV appearances, including two major TV series for Channel 4 in the UK and The Learning Channel in the US – Quest For The Lost Civilisation and Flooded Kingdoms of the Ice Age – have put his ideas before audiences of tens of millions. He has become recognised as an unconventional thinker who raises controversial questions about humanity’s past.

Graham Hancock’s multi-million bestseller Fingerprints of the Gods remains an astonishing, deeply controversial, wide-ranging investigation of the mysteries of our past and the evidence for Earth’s lost civilization. Twenty years on, Hancock returns with Magicians of the Gods, the sequel to his seminal work. Published on 10 September 2015 in the UK and on 10 November 2015 in the US, Magicians of the Gods is not in any sense an ‘update’ of Fingerprints but is a completely new book filled from front to back with completely new evidence, completely new travels to the world’s most mysterious archaeological sites, and completely new insights, based on the latest scientific evidence, into the global cataclysm that wiped an advanced civilization from the earth and made us a species with amnesia, forced to begin again like children with no memory of what went before.

But there were survivors – known to later cultures by names such as ‘the Sages’, ‘the Magicians’, ‘the Shining Ones’, and ‘the Mystery Teachers of Heaven’. They travelled the world in their great ships doing all in their power to keep the spark of civilization burning. They settled at key locations – Gobekli Tepe in Turkey, Baalbek in the Lebanon, Giza in Egypt, ancient Sumer, Mexico, Peru and across the Pacific where a huge pyramid has recently been discovered in Indonesia. Everywhere they went these ‘Magicians of the Gods’ brought with them the memory of a time when mankind had fallen out of harmony with the universe and paid a heavy price.

A memory and a warning to the future… For the comet that wrought such destruction between 12,800 and 11,600 years may not be done with us yet. Astronomers believe that a 20-mile wide ‘dark’ fragment of the original giant comet remains hidden within its debris stream and threatens the Earth. An astronomical message encoded at Gobekli Tepe, and in the Sphinx and the pyramids of Egypt, warns that the ‘Great Return’ will occur in our time…