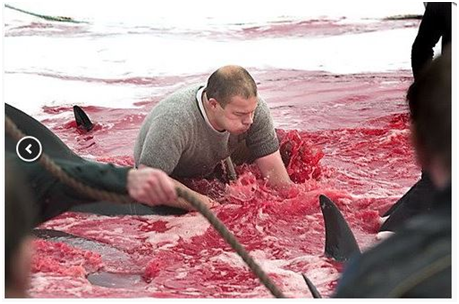 The Faroe or Faeroe Islands are 18 islands in the middle of the North Atlantic Ocean, Northwest of Scotland and halfway between Iceland and Norway. The Islands are a self-governing island territory of Denmark, although they politically aim for higher independence. The Islands have a population of nearly 50,000, and a language and culture of their own.

This is not a poor country any more. It is said, the Faroese have the best standard of living to any country in Europe. They receive a larger income per capita than any other nation. Denmark also subsidise their economy each year by approx 10%.

Recently Scotland accused the fisheries of Faroe of unsustainable fishing having caught 115 thousand tonnes of fish while allocated 45 thousand.  As a nation they catch more fish per capita, than any other country in the world.

These proud people have a history of whaling for survival practised since about the time of the first Norse settlements on the islands. It is regulated by Faroese authorities but not by the International Whaling Commission as there are disagreements about the Commission’s legal competency for small cetaceans. Around 950 Long-finned Pilot Whales are killed annually, mainly during the summer. The hunts, called grindadráp in Faroese, are non-commercial and are organized on a community level; anyone can participate. Once attached, they are dragged to the shallow water, where participants in the kill then wade in the sea to around waist hight. There they are slaughtered with traditional knives whose blades are usually 16 to 19 cm (6.3 to 7.5 in) long. Usually two deep cuts are made on either side of the animal’s neck, just behind the blow hole, causing the head to drop forward; a third cut is then made through the middle of the neck down to the carotid arteries and spinal cord, which are severed. After a period of violent thrashing the animal is paralysed and loses consciousness, dying of blood loss in most cases. With this the sea turns bright red with blood. Reports differ on the kill. Faeroes say it takes 8 seconds for the animal to die, others have reported up to 4min 45 seconds for some whales to die. In some cases there have been reports and images of animals with 6 attempts to slice the spinal cord.

No animal is left to live. 5% of the females are heavily pregnant. These too are slaughtered and the fully formed calf is ripped from the females body. Make no doubt about it, these hunts are enjoyed if not savoured with an audience up to 400 viewing from the surrounding areas.

The meat is then shared out between the community, the mayor receives a larger share. Sometimes a small amount is sold in shops and restaurants.

So reading this you would wonder why in 2013, 1534 whales and dolphins were slaughtered on the beaches of Faroe. A question I have been asking myself with little answers.

Whale meat is toxic, faroese admit to the freezers being full to the brim of meat they cant eat.

They have an ever growing tourist trade with at least 5 cruise companies making scheduled stops each week. There farmed salmon is growing in output each year also adding a manufacturing plant for herring and afish pellet processing plants.

These are not the islands they once were, cut off from the world. Plane and ferries link Denmark and Iceland on a daily basis bringing in a steady supply of fresh fruit, veg and meat.

Their airport has never been busier bringing in an endless supply of naturists keen to sample the unspoiled islands.

What can be done?

Direct influence to consumers of their fish and influence the tourist trade, other than that I have no answers. There are two kinds of Pilot whale, short finned and long finned. These animals are very social. Usually found in groups with numbers between 20-90, although pods of 200 have been seen. Within these groups there are usually 4 associations between related females and their offspring. Males are found within the pod although not related. Research shows males join for a brief period, mate with females then move on.

Mass standings are often involving pilot whales. It is thought these breachings are the result of a persistence to keep the group together. Their family bond so strong they will not abandon one of their own.

Related to the Killer whale, they are often found in marine parks like Sea world and in Taiji they are caught for sale.

Their inquisitive nature has been exploited by the Faeroe as their natural curiosity makes them an easy catch. They love to eat squid and follow shoals of it. The faroese know this and watch for the squid knowing the whales wont be far behind.

Females are very maternal and have been known to nurse a calf until it is 18. they dive up to 1600 ft and are known as “cheetahs of the deep” due to their swift dive style.

The hunt begins when the hunt master raises the flag to notify islanders there are whales in the area.

The whales or dolphins are then hooked in the blow hole. This may take several attempts as the animals skin is smooth and they struggle.

In 2008 the results of studies carried out by chief medical officers of the Faroes themselves were published.  The mercury content of whale meat and blubber was so high, (3mg per kilo) it was recommended that pilot whales no longer be considered fit for human consumption. In other words its toxic. A statement to the islanders, by chief medical officers Pál Weihe and Høgni Debes Joensen announced that pilot whale meat and blubber contains too much mercury, PCBs and DDT derivatives to be safe for human consumption.

“It is with great sadness that this recommendation is provided,” they said. “The pilot whale has kept many Faroese alive through the centuries.”

The medical officers noted that it wasn’t the Faroese who created the pollution. But “these results have already led to tightened restrictions on pollution worldwide. We must therefore also ourselves acknowledge the consequences. One meal of whale meat at the most was recommended. Total avoidance of offal and blubber at all times. These people have been documented saying “their freezers are full of whale meat”