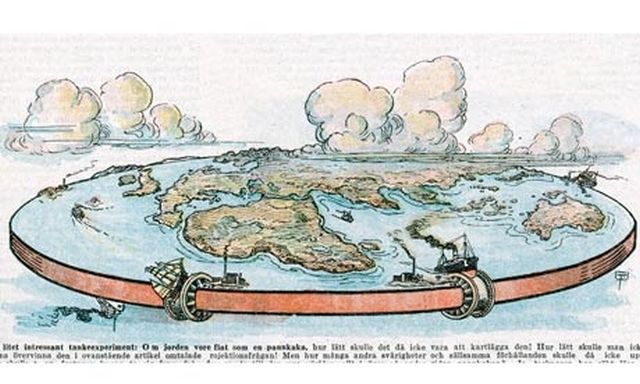 Columbus was the only one of his time who believed that the Earth was round; everyone else believed it was flat. The Flat-Earthers thought the Earth didn’t fall because it was resting on huge elephants. But what were the elephants resting on? On the back of a gigantic turtle. What was the turtle resting on? It was swimming in an ocean. Did the ocean stretch all the way down? No answer. While the Earth does look flat, is it safe to decide that it is flat? There are still people who believe the Earth is FLAT. In 1881, English writer Samuel Rowbotham published Zetetic Astronomy: Earth Not A Globe, in which he affirmed that Earth is flat. His work initiated mini movements one of them being The Flat Earth Society, a modern group dedicated to promoting Rowbotham’s ideas and trying to convince people that Earth is indeed flat.

They believe the Earth is a disc with the Arctic in the center and Antarctic, a 150-feet-tall ice wall, around the rim holding back water. NASA employees guard this ice wall to prevent people from climbing over and falling off the disc. Earth’s day and night cycle is explained by positing that the sun and moon are spheres measuring 32 miles that move in circles 3,000 miles above the plane of the Earth. These celestial spheres illuminate different portions of the planet in a 24-hour cycle. To the members of The Flat Earth Society, NASA had been fooling the world, about the Earth being round, with its photographic and video evidence all these years. GPS devices are rigged to make airplane pilots think they are flying in straight lines around a sphere when they are actually flying in circles above a disc, they assert. Flat-Earthers believe there must also be an invisible ‘antimoon’ that obscures the Moon during lunar eclipses. And that the world governments profit from the funding NASA, the kingpin of the ‘round Earth conspiracy’, and other space agencies receive to conceal the true shape of the Earth. Because NASA thinks the Earth is round so everyone believes the Earth is round – NASA is not running a real space program, so they don’t know the shape of the Earth. The Flat-Earthers have a supporter in Matthew Boylan, former NASA operational graphics manager, who worked for years creating photo-realistic computer graphics for NASA. Boylan claims that NASA’s sole reason for existence is to propagandize the public and promote this false ball-Earth heliocentric worldview. He states unequivocally that every picture and video of the ball-Earth, all the Moon/Mars landings, the existence of orbiting satellites, space stations, and all Hubble images are hoaxed. Steve McCurry in his book Untold: The Stories Behind the Photographs says, “No shutter today could be used outside the earth. The loss of gravity would damage any pictures and the camera”.

Below is a humorous compilation of NASA’s fake CGI spinning ball-Earth compared with actual amateur balloon footage from space, showing the Earth to be completely flat and motionless, and NASA to be the most successful liars in history.

Some Questions Do Remain:

And Here’s Why The Earth Could Be Round: