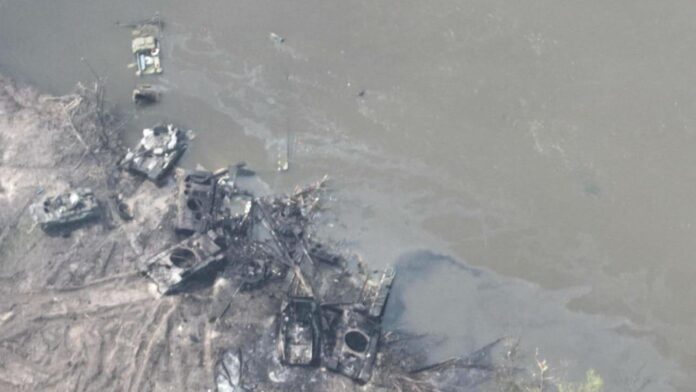 The better part of two or more Russian army battalions—potentially 100 vehicles and more than a thousand troops—in recent days tried to cross a pontoon bridge spanning the Siverskyi Donets River, running west to east between the separatist provinces of Donetsk and Luhansk in eastern Ukraine.

Ukrainian artillery caught them at the river bank—and destroyed them. The rapid destruction of around six dozen tanks and other armored vehicles, along with the bridge itself, underscores Russia’s deepening woes as its troops try, and fail, to make meaningful gains in eastern Ukraine’s Donbas region.

“We still assess Russian ground force in the Donbas to be slow and uneven,” an unnamed U.S. Defense Department official told reporters on Tuesday.

The Russians’ inability to cross rivers might explain their sloth. To be fair, “conducting river-crossings in a contested environment is a highly risky maneuver,” the U.K. Defense Ministry noted.

The Siverskyi Donets, which threads from southern Russia into eastern Ukraine then back into Russia, is just one of several water barriers Russian battalions must cross in order to advance west into Ukrainian-held territory. According to the Ukrainian armed forces’ general staff, the battalion that got caught at the pontoon bridge apparently was trying to strike at Lyman, a city of 20,000 that lies 17 miles west of the doomed crossing.

The Ukrainian army’s 17th Tank Brigade spotted the bridge, perhaps using one of the many small drones that function as the army’s eyes over the battlefield. The 17th is one of the army’s four active tank brigades. Its line battalions operate T-64 tanks and BMP fighting vehicles.

But it was the brigade’s artillery battalion with its 2S1 122-millimeter howitzers that apparently got first crack at the Russian bridge and the vehicles and troops concentrated on and around it, out in the open.

The 17th’s shelling destroyed more than 70 T-72 and T-80 tanks, BMPs, MT-LB armored tractors and much of the bridging unit itself, including a tugboat and the pontoon span.

It’s unclear how many Russians died or were wounded, but it’s worth noting that no battalion can lose most of its vehicles and remain capable of operations. In one strike, the Ukrainians removed from the battlefield one or two of the roughly 99 Russian battalion tactical groups in Ukraine.

In the aftermath of their defeat, local Russian forces mostly stuck to their side of the river, “trying to hold positions on the right bank,” according to the general staff in Kyiv. The disastrous river-crossing comes as Russian forces also are retreating away from the city of Kharkiv, farther north.

To be fair to Moscow, crossing any water obstacle during wartime is dangerous. The Ukrainians can claim perhaps the most lopsided victory over an enemy bridging effort, but the Russians have knocked out some Ukrainian spans, too.