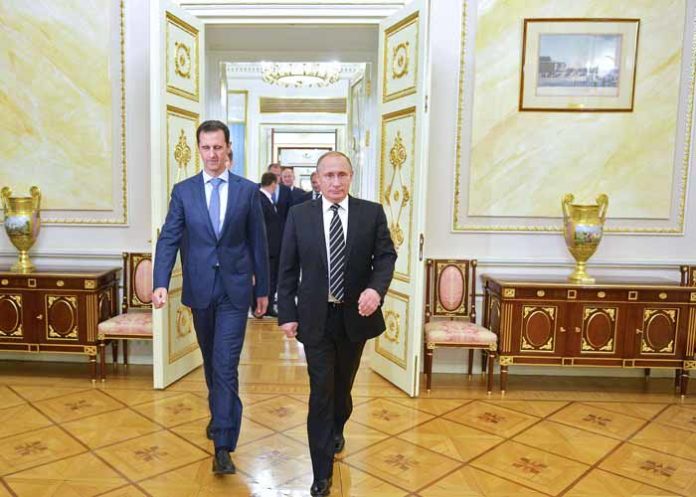 President Bashar al-Assad, in a press conference, said that only time will tell if the new US President-elect would change the American rules for Syria, further stating that he is willing to co-operate in finishing the war with ISIS quickly.

On Donald Trump’s victory for the 2016 presidential race, President Assad stated that Trump, on his many speeches before the win, made it clear that he would do whatever it takes to finish ISIS, potentially “shoring up” Assad’s regime, rather than disposing of it.

As we know, Trump’s approach to current US policy, is to say the least, different. The new President-elect has a competing view against current foreign policy intervention in Syria, and has a different view of the United States’ allies in the region. In addition, the United States, along with Saudi Arabia and Turkey, in the past, has backed insurgents in disputed territory. Trump has questioned the need to back them, and not only that, has questioned the American hardline of overthrowing Assad’s regime when Assad is all for killing ISIS.

Assad also stated that such factors as working alongside Russia and Iran to take down ISIS, bring into question whether Donald Trump will keep his word or not.

Syria has longed for a nation without ISIS, yet the United States has denied this idea, reasoning the Assad regime is to blame for the political and military mess in Syria.

Assad also openly stated that he was ready to co-operate with the American government, but only if they stopped supporting the rebels, and stopped conspiring against him to subvert his leadership via the proxy war. Assad says that peace can only be obtained if they bring an end to this current war.

The current situation in Syria has seen the areas under the control of Bashar al-Assad’s government scattered; facing not only ISIS, but also the Kurdish militia and rebels wanting to remove him from power. This instability is seeing thousands of innocent men, woman and children killed every day, impacting heavily on the already world crisis of refugees, not to mention a nation being ripped apart in a civil-come-proxy war.

This article (Assad Wants Syria Free of ISIS and Hopes for US Help. But Will Trump Help Him?) is a free and open source. You have permission to republish this article under a Creative Commons license with attribution to the author and AnonHQ.com.