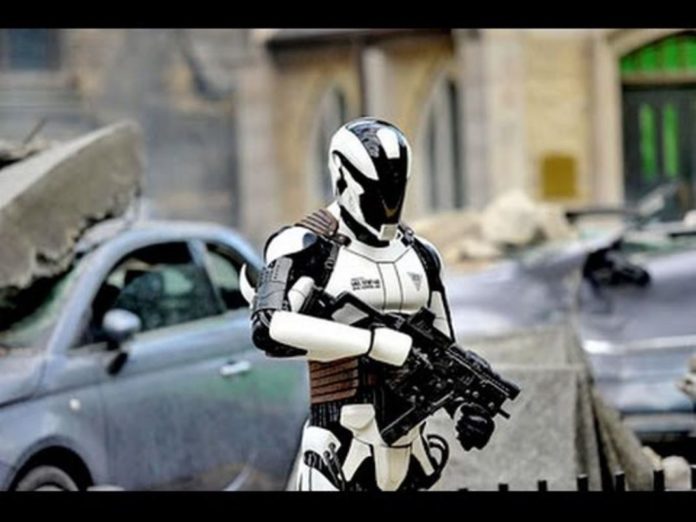 In an age of rapidly advancing technology, it would be ignorant to think that the spoils of the new age were enjoyed by all, except the police. Instead of focusing their efforts and money on grander causes, many have sought to profit from the ever-expanding police state. In the years to come, we will see an onslaught of new technologies aimed at calming unrest and quelling protest. Police automatons, drone warfare and advanced person equipment worn by police are all on the horizon. Here is our list of the top five new technologies coming to a police state near you. Police have already been using robot-like devices to disarm bombs and perform other dangerous tasks. A whole new wave of Robocop is headed our way – that do more than just blow up when needed. Military grade robotics are becoming low enough in cost to make them available to police forces around the world. Companies like Northrup Grumman are already working on advanced robotics that would patrol our streets, and if needed, notify the real cops to come and handle a situation. Before you know it, a real-life Robocop will be walking around, terrorizing the population on behalf of their human overlords. An Arizona company recently filed for a patent on a new breed of handcuffs. These advanced restraint devices, called augmented detainee restraints, not only keep your hands restrained, they will drug you and give you a jolt of electricity at the whim of your captor. The patent recently filed described the electric shock as coming in between 20,000 and 150,000 volts. The drugs that can be administered are done so through a gas injection system. I guess it isn’t enough to take you to jail; now they’ll ensure they have total control over you on your way downtown. Weaponized drones are already making their way into police forces on a worldwide scale. The FAA has loosened up on drones in the US, and the Department of Homeland Security has begun to funnel money to local police agencies for drone equipment. While the majority of drones currently in use are for surveillance, the newer models are being fitted with everything from Tasers, rubber bullet guns to various gasses. As less and less people are going into police work, there will come a day when armed drones are seen patrolling our streets right next to Robocop with the advanced handcuffs on standby. The Pain Ray Cannon, known in law enforcement circles as the Active Denial System, is one of the most horrific inventions since the time of the Nazis. It is a directable cannon that shoots microwaves at large crowds, essentially cooking them like popcorn. It blasts the crowd with a directed wave of heat energy, working by aggravating the molecules in the skin, much like a household microwave. Despite the obvious implications, it has been deemed safe and non-lethal. Smartbelts are the one thing on this list that might actually be a good thing. Being developed by Motorola, a smartbelt maintains a digital link between the officer’s duty belt and dispatch. It would keep a record of every time the officer’s gun came out of the holster and monitor the officer’s GPS coordinates, speed and various times. This technology could actually keep cops accountable and debunk a cop’s story when he says he didn’t have his gun out. Instead of more weapons of war directed at the people, police should focus on tech like this, helping to keep the cops accountable to the public.

This article (The Top 5 Future Law Enforcement Technologies, Coming to a Police State Near You) is a free and open source. You have permission to republish this article under a Creative Commons license with attribution to the author and AnonHQ.com.