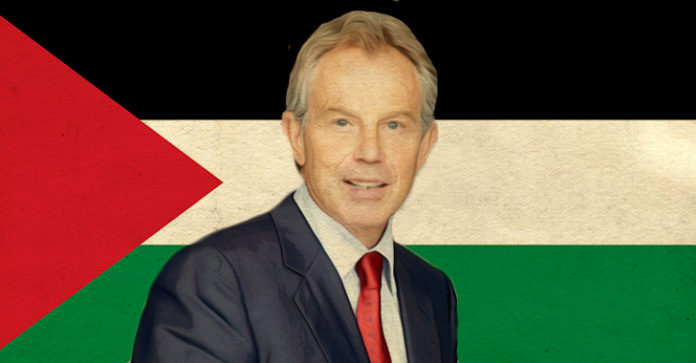 Written by: Justin King at theantimedia.org

Gaza – Former British Prime Minister Tony Blair gave the world some food for thought by stating that the best way to end the cycle of violence in Gaza is to encourage prosperity in the region.

“I’m extremely concerned that if you leave Gaza in the state it’s currently in, you’ll have another eruption, and violence, and then we’re back in a further catastrophe, so we’ve got to stop that.”

“The place to start with peace is actually Gaza, because if we’re able to change the situation in Gaza, politically and economically, then we’re able to do a lot of changes in the whole of the politics of this conflict”

While the Western media did its best to discuss the precision strikes by the IDF, the fact is that the bombing and shelling left more than 5% of the population with destroyed homes. 5% seems like a small percentage, but it’s the entire population of Boulder, Colorado. In short, it’s dumping 100,000 homeless people into Houston while the government withholds tax revenues. At the same time, the entire city’s infrastructure has been destroyedand construction supplies must pass an exhaustive series of checks to make sure weapons aren’t being smuggled in. Additionally, the city is under blockade by a nation that has advised starving them in the past.

The Pro-Israel lobby immediately took issue with the statement, probably out of blind obedience to the Israeli-run propaganda machine. Completely blinded by the Israeli flag, they don’t realize that Blair may have stumbled on to a brilliant plan. A wealthy and prosperous Palestine will be much less likely to go to war. As it stands, the Palestinian people have nothing. When a population falls so low that they have nothing to lose, their will to fight is increased exponentially.

Hamas currently has the Palestinian people’s attention. Their influence and rhetoric sends thousands of willing volunteers to the insurgent groups. Their power is firmly rooted in their control of what little economy Gaza has. The current economy of Gaza produces one thing: defiance. A poor and downtrodden people will fight. They are already residents of the largest open air prison on earth. Many see it is better to die on their feet than to live on their knees.

An economy that isn’t being crippled by Israeli blockades, tax withholding, and being hamstrung by red tape could see robust growth. A prosperous and educated people do not want to go to war. The problem with Blair’s plan is that it requires a number of parallel solutions. The Palestinian people will most likely not accept money from Israel, and those that would may become outcasts within the community, which would cause their businesses to fail. That leaves it up to the international community. It’s a community that is being led by the United States, a nation that is so war-oriented that it threatened to withdraw humanitarian aid if the Palestinians pursued their legal right to have possible Israeli war crimes investigated.

An influx of investment capital from a source that the Palestinian people will accept and that Hamas cannot take credit for, combined with an easing of the economic apartheid instituted by Israel could spur the economy. This glimmer of economic hope is likely to overshadow the current mentality of war. If people can see improvement associated without the intangible costs associated with war, they are likely to take it.

If the economy of Gaza rebounds, and free trade exists, the idea of a two-state solution becomes more palatable to both parties. After all, the only thing proven to override a person’s belief in a holy book is their belief in their bankbook.