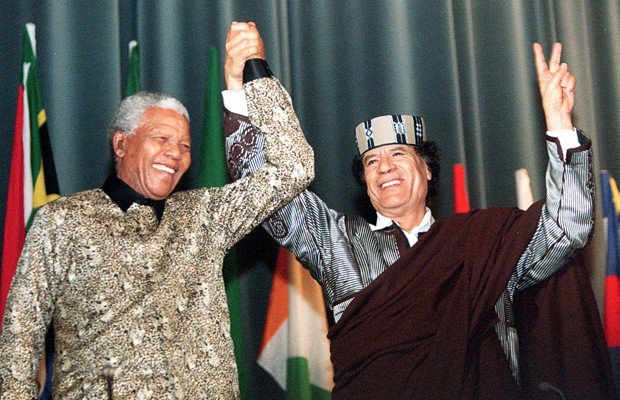 1. In Libya, a home is considered a natural human right.

The material needs of people that are basic and personal start with food, housing, clothing and transport and must be regulated as private and sacred and their satisfaction should not depend on hire. To satisfy these material needs through rent, gives the original owner the right to interfere in your personal life and to control your imperative needs, even if the original owner be the society in general. The original owner can usurp your freedom and take away your happiness. The interference of the original owner may include repossessing your clothes, even leaving you naked on the street. Likewise, the owner of your means of transportation may leave you stranded on the sidewalk, and the owner of your house may make you homeless.

People’s imperative needs cannot be regulated by legal or administrative procedures. They must be fundamentally implanted into the society in accordance with natural rules.”

Qaddafi’s views on education are actually a whole lot more progressive than many US politicians. He believed that education had nothing to do with a routinized curriculum. He pointed to the fact that the western world has forced their youth to learn during specified hours while sitting in rows of desks, and that this type of education now prevails all over the world and goes against human freedom; education is a far broader concept than sitting in a row and absorbing propaganda about the greatness of historical figures who did not really earn their renown (Columbus established slavery in America, and Edison stole his inventions from others), or singing some patriotic national song every day.

He strongly believed that state controlled/standardized education is again, a “forced stultification” of the masses. He believed that all governments who set courses of education in terms of a formal curriculum and force people to learn them are coercing and manipulating their citizens. He was right.

“All methods of education prevailing in the world should be destroyed through a universal cultural evolution that frees the human mind from curricula of fanaticism which dictate a process of deliberate distortion of man’s tastes, conceptual ability and mentality.”

He did not mean that schools should be closed, in fact he believed that education was important; his gripe was that society should provide all types of education, and give the child the chance to choose freely between his courses. Nobody should tell him or her what knowledge is true “because we the government says it is”, while restricting the pursuit of his own creative ideas, stamping out any creative thought, any wish to change the circumstance he is in.

“Knowledge is a natural right of every human being of which no one has the right to deprive him or her under any pretext, except in a case where a person does something which deprives him or her of that right.”

Politicians seem to only be intent at figuring out how to accumulate greater tax revenues… their solution seems to be to put a meter on everything. It’s just another way, out of many, to force us to keep working. Keep being the willing slave. It certainly isn’t difficult for an oil-exporting state to provide electricity free of charge, but he was surrounded by oil-exporting states that charged their own citizens for the resource.

6. All newlyweds in Libya would receive 60,000 Dinar ($50,000 USD) by the government to buy their first apartment to help start a family.

7. A portion of Libyan oil sales is or was  credited directly to the bank accounts of all Libyan citizens

8. Libya had it’s own state bank which provided loans to citizens at zero percent interest by law and they had no external debt.

9. A bursary was given to mothers with newborn babies

10. If Libyans cannot find the education or medical facilities they need in Libya, the government would fund them to go abroad for it – not only free but they get US $2,300/month accommodation and car allowance

Qaddafi was no terrorist, and regardless of what you think of the above ten points, American intervention has turned Africa’s richest nation into a hell-hole dominated by Islamic extremists in the West, a Western-backed powerless government on the East. Migrant trafficking plagues the North, and terrorists the South. The Western governments were happy to depose the man, but “for some reason” lost all interest in helping the country achieve stability thereafter.