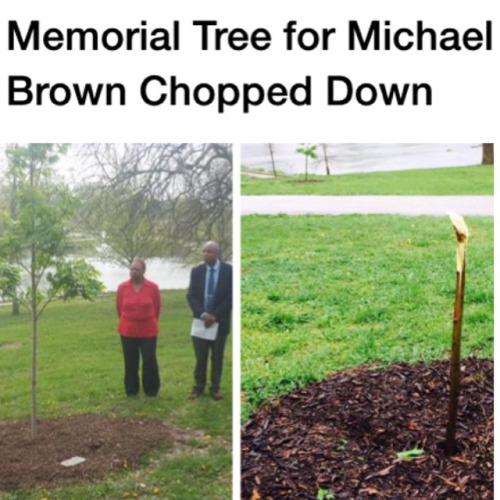 The killing of Michael Brown in Ferguson, Missouri on August 9 last year brought lots of protests and debates about the general attitude towards blacks in Missouri and across the United States.

Michael was shot dead by officer Darren Wilson. After his burial, the black community decided to plant a tree in his memory. But only one day after the tree was planted, it was destroyed the following day by an unknown person who people believe is a supporter of the police officer-Darren Wilson who shot Michael.

The tree was completely vandalized and the saddest part of the story is that the memorial plague accompanying the tree was also stolen. “The tree was dedicated by the Black Caucus of the American Library Association on Saturday, but was found vandalized on Sunday morning.” Local KMOV news said.

The memorial site where the tree was planted is not a private property where the action of the person who destroyed can even be justified. It is a public property. “The memorial is along a walking trail in n January-Wabash Park in Ferguson”, the news media added.

“It’s real sad day when a tree is dedicated and the next day someone comes along and destroys it just for the heck of it”, Gerald Brooks of the Black Caucus of the American Library Association said.

The tree was said to be used as ‘a symbol of peace, comfort and hope for all who gather around its branches’ and the victim who suffered his untimely death as a result of hatred that is embedded in the Missouri community. People in Missouri have expressed shock about the incident. Some say after they have been murdered for no reason, they cannot also have a decent memorial site for their generation to come to remember them.

One desperate and angered resident was quoted as saying “I can’t understand why someone would want to cut down the tree. What, they want to start something back up again?”

The police as usual say they are investigating the matter and that they are looking for possible witnesses to come forward and give further detail about how the tree was destroyed and the plague stolen.

“Officers canvassed the area talking to anyone who might have seen or heard anything related to the incident”’ the city police said in a statement.

A park visitor who first saw the tree being destroyed first told local news outlets “it’s not going to get any better if you keep having stuff like that happen.”

It is said this incident is the third time that memorial monument has been destroyed in honor of Michael. In September last year, a memorial that included stuffed toys, images and notes close to where Michael died was strangely destroyed by a fire. And in December, a car hit and destroyed another memorial. There was speculation that the driver deliberately hit the memorial. These actions in the city are heightening tensions and independent observers say it could lead to disturbances if the police did not arrest individuals who are deliberately fueling tensions.

Michael deserves a special rest. A place people can visit and remember him for a possible forgiveness and the way forward to avoid such incident in the future. The police must act to stop these people destroying Michael Brown’s memorial monuments.