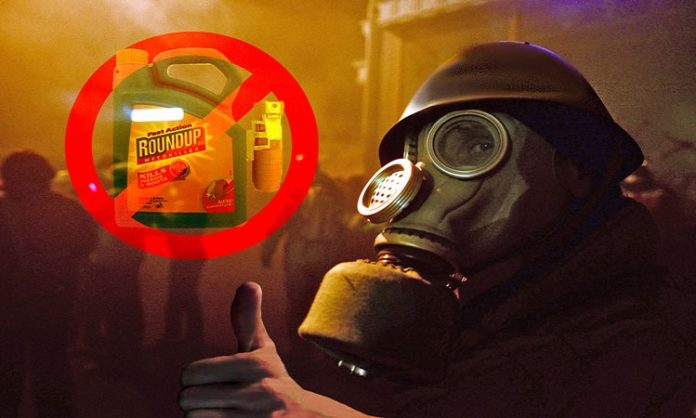 (ZHE) If we had a dime for every kooky conspiracy theory we’ve heard alleging some vast corporate conspiracy to exploit the treasures of the earth, destroy the environment and poison people with unknown carcinogens all while buying off politicians to cover their tracks, we would be rich. The problem, of course, is that sometimes the conspiracy theories prove to be completely accurate.

Lets take the case of the $60 billion ag-chemicals powerhouse, Monsanto, and their controversial herbicide, Roundup as an example. For those who aren’t familiar, Roundup is Monsanto’s blockbuster weedkiller, credited with transforming U.S. agriculture, with a majority of farm production now using genetically modified seeds resistant to the chemical.

For years the company has assured farmers that their weed killing product was absolutely safe to use. As proof, Monsanto touted the approval of the chemical by the Environmental Protection Agency (EPA). That said, newly unsealed court documents released earlier today seemingly reveal a startling effort on the part of both Monsanto and the EPA to work in concert to kill and/or discredit independent, albeit inconvenient, cancer research conducted by the World Health Organization’s International Agency for Research on Cancer (IARC)…More on this later.

But, before we get into the competing studies, here is a brief look at the ‘extensive’ work that Monsanto and the EPA did prior to originally declaring Roundup safe for use (hint: not much). As the excerpt below reveals, the EPA effectively declared Roundup safe for use without even conducting tests on the actual formulation, but instead relying on industry research on just one of the product’s active ingredients.

“EPA’s minimal standards do not require human health data submissions related to the formulated product – here, Roundup. Instead, EPA regulations require only studies and data that relate to the active ingredient, which in the case of Roundup is glyphosate. As a result, the body of scientific literature EPA has reviewed is not only primarily provided by the industry, but it also only considers one part of the chemical ingredients that make up Roundup.”

Meanwhile, if that’s not enough for you, Donna Farmer, Monsanto’s lead toxicologist, even admitted in her deposition that she “cannot say that Roundup does not cause cancer” because “[w]e [Monsanto] have not done the carcinogenicity studies with Roundup.”

And just in case you’re the super skeptical type, here is Farmer’s actual email, from back in 2009, which seems pretty clear:

“you cannot say that Roundup does not cause cancer..we have not done carcinogenicity studies with ‘Roundup.’”

And while the revelations above are quite damning by themselves, this is where things get really interesting.

In early 2015, once it became clear that the World Health Organization’s IARC was working on their own independent study of Roundup, Monsanto immediately launched their own efforts to preemptively discredit any results that might be deemed ‘inconvenient.’

That said, Monsanto, the $60 billion behemoth, couldn’t possibly afford the $250,000 bill that would come with conducting a legitimate scientific study led by accredited scientists. Instead, they decided to “ghost-write” key sections of their report themselves and plotted to then have the independent scientists just “sign their names so to speak.”

“A less expensive/more palatable approach might be to involve experts only for the areas of contention, epidemiology and possibly MOA (depending on what comes out of the IARC meeting), and we ghost-write the Exposure Tox & Genetox sections…but we would be keeping the cost down by us doing the writing and they would just edit & sign their names so to speak.”

Finally, when all else fails, you call in those “special favors” in Washington D.C. that you’ve paid handsomely for over the years.

And that’s where Jess Rowland, the EPA’s Deputy Division Director for the Office of Chemical Safety and Pollution Prevention and chair of the Agency’s Cancer Assessment Review Committee, comes in to assure you that he’s fully exploiting his role as the “chair of the CARC” to kill any potentially damaging research…”if I can kill this I should get a medal.”

All of which begs the question of whether the D.C. swamp is just too large to be drained.