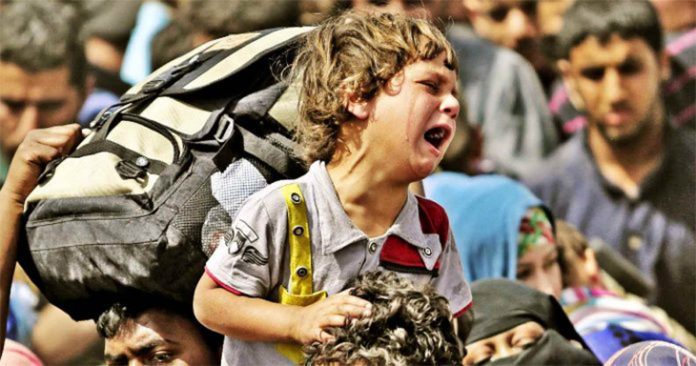 While the sanctions placed on Iraq by the United Nations Security Council in the 1990s may be a distant memory for some, it’s critical to remember the shameful aftermath as the Trump administration undertakes the sanctioning of certain specific individuals in Syria. No matter the position one might take on the issue of sanctions, the fact remains that they caused a decade of tremendous suffering and widespread deaths of Iraqi civilians, many of them children.

The widely-reported number of children who died as a result of the sanctions has been as high as 576,000, although one subsequent report estimated 227,000 and a second approximated 350,000. Chuck Sudetic, a journalist who spent time in Basra documenting how sanctions affected the city, wrote in late 2001 that  “According to an estimate by Amatzia Baram, an Iraq analyst at the University of Haifa in Israel, between 1991 and 1997 half a million Iraqis died of malnutrition, preventable disease, lack of medicine, and other factors attributable to the sanctions; most were elderly people or children. The United Nations Children’s Fund puts the death toll during the same period at more than 1 million of Iraq’s 23 million people.” Despite conflicting estimates, each set of figures are staggering and tragic.

The United States Security Council Resolution 661 was adopted in August of 1990 following Iraq’s invasion of Kuwait, “imposing comprehensive multilateral international sanctions on Iraq and freezing all its foreign assets. Iraq was no longer free to import anything not expressly permitted by the United Nations, and companies were forbidden from doing business with Iraq, with very limited exceptions,” according to David Rieff writing for The New York Times in 2003.

“Government assets abroad were frozen and financial transactions with Iraq were prohibited. The country’s economy collapsed immediately and Saddam blamed the United States. He made himself a hero across the Arab world by defying Washington and refusing to quit Kuwait, even as U.S.-led forces began attacking Iraq by air on January 17, 1991,” Sudetic noted.

In 1995, the U.N. proposed the Oil For Food Program which sought to ease some of the burdens caused by the sanctions by allowing Iraq to sell more oil to pay for humanitarian necessities like food and medicine. While first resisted by Saddam Hussein, who initially claimed that the program violated sovereignty, the program was later initiated and Hussein used the program to his advantage. Slate’s Michael Crowley wrote that Hussein took advantage of the program in three ways: first, by ignoring stipulations and selling oil illegally to Syria, Turkey, and Jordan among others to the one of about $13.6 billion; utilizing “pricing schemes, surcharges, and kickbacks to milk another $7 billion or more from oil buyers and sellers of humanitarian supplies”; and engaging in bribery via “a list of people who were given vouchers to buy Iraqi oil at below-market price—essentially, multimillion-dollar buy-offs.” The program ended abruptly and “subsequent investigations show the program was poorly managed and riddled with fraud,” according to PBS.

The sanctions imposed on Iraq have been inarguably disastrous, and Oil for Food was known to be an overall failure rampant with corruption that did little to ease the suffering of Iraqi civilians. Syria is no stranger to American-led sanctions, as they have been imposed in the past by the Bush and Obama administrations. But is the United States headed toward repeating history in its newest sanctions on Syrian scientists?

On April 24th, the Trump administration placed sanctions on 271 Syrian government employees in response to the sarin gas attack that killed 80 civilians. “The United States is sending a strong message with this action that we will not tolerate the use of chemical weapons by any actor, and we intend to hold the Assad regime accountable for its unacceptable behavior,” said Treasury Secretary Steven Mnuchin.” The New York Times noted that the sanctions are targeted toward “highly educated Syrian officials with deep expertise in chemistry who were thought to have the ability to travel extensively and possibly to use the American financial system.”

The Associated Press states that “any property or interest in property of the individuals’ sanctioned must be blocked, and U.S. persons are generally prohibited from dealing with them.” Also according to AP, “Three U.S. officials said that the sanctions are part of a broader effort to cut off funding and other support to Syria’s President Bashar Assad and his government amid the country’s escalating civil war. The U.S. blames Assad for a recent chemical attack on Syrian civilians, and responded earlier this month by launching missiles against a Syrian airfield.”

France has joined the United States in assigning responsibility to the Syrian government for the chemical attack, while Russia and Syria have denied that the Assad regime was behind the attack. Former Congressman Ron Paul (R-TX), a longtime opponent of sanctions, continues to question the United States’ assertion that Assad gassed his people. Members of the Veteran Intelligence Professionals for Sanity, a group of former U.S. intelligence officials, have repeatedly urged President Trump to carefully re-evaluate all aspects of the incident and his position on retaliation. On Saturday, the group criticized Defense Secretary James Mattis’ assertion of there being “no doubt” that the Syrian government is “retaining” chemical weapons, noting that Mattis sounded quite similar to Vice President Dick Cheney when he proclaimed there was “no doubt” that Hussein possessed WMD’s.

“In the case of Syria, the ‘no doubt’ standard Mattis has employed does not meet the ‘reasonable man’ standard. Given the consequences that are attached to his every word, Secretary Mattis would be well advised not to commit to a “no doubt” standard until there is, literally, no doubt.” — Veteran Intelligence Professionals for Sanity

While the newest issue of sanctions on Syrian government workers is not nearly as extensive as those placed on Iraq in the 90’s, the American people are being told the same story about the Assad regime as they were told about the Hussein regime: that dictators are in possession of dangerous weapons and must be stopped. But what must be stopped are hurried military retaliations and intensified meddling in foreign affairs that pose no imminent threat to the United States. As deplorable as some actions overseas have been, the U.S. government is once again indicating its eagerness to participate in the further battle to weaken Assad- an eerily familiar mission, and one that President Trump once promised the public that he would avoid.