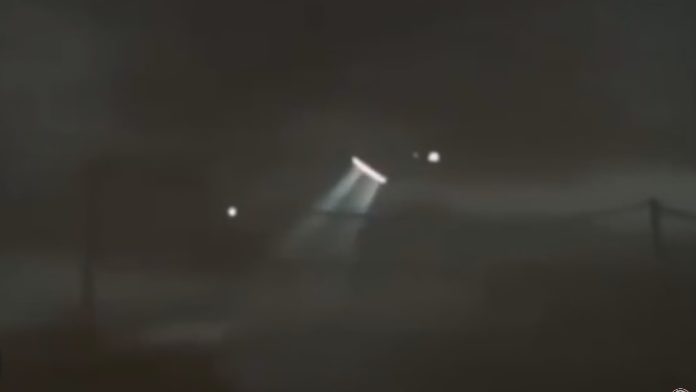 Another unexplainable video of a UFO sighting has emerged on YouTube last week. The video clip documents a strange but clear view of a cigar-like object hovering in the night skies of “possibly near” Paris, France. Similar footage was recorded in 2014 along the Gold Coast in Australia, and in China in 2010, over an airport that ended up being closed, with out bounded flights grounded and incoming flights diverted.

The new video documenting the strange light shows a suspended elongated object floating in the sky and emitting beams of light. Uploaded to the YouTube channel SecureTeam10, the channel’s creator Tyler Glocker admits he has limited information to explain the video’s appearance. Glocker explained that the video was received via email and that the information accompanying it stated it was recorded near Paris last week. Admittingly, Glocker also says he is dubious about the location and that no time stamp was available.

UFO sightings are becoming frequent in the tech era as citizens capture footage on their phones. However, skeptics are most likely to debunk the latest footage as an elaborate hoax. Meanwhile, for those convinced that alien life exists, the clip provides clear footage.


Is the clip a fabrication, a hoax, or are these objects real? If they are, what are they?

In recent times, lucid accounts of UFO sightings have documented an abundance of evidence existing to support the theory of extraterrestrial life forms and visitations to Earth. Former NASA astronaut and professor of physics at Princeton University (amongst many other titles), Dr Brian O’Leary was one such expert to claim these sightings as valid, shortly before his death caused by cancer.

“There is abundant evidence that we are being contacted, that civilizations have been monitoring us for a very long time. That their appearance is bizarre from any type of traditional materialistic western point of view. That these visitors use the technologies of consciousness, they use toroids, they use co-rotating magnetic disks for their propulsion systems, which seems to be a common denominator of the UFO phenomenon,” O’Leary said.


Apollo 14’s Edgar Mitchel, the sixth man to walk on the Moon has also spoken out about UFO phenomenon as a real entity, and his knowledge of Roswell.

“The evidence for visiting of other species goes back in historical record. Back past the bible to ancient times. Clearly they have been coming here in more recent times. Governments keep hushing it up. They don’t really want to talk about it,” Mitchel said in an interview with the Observer. “The government and powerful parties may use the technology for profit motives. They want to hold onto everything. Particularly the idea of going off the planet – they want to hold onto it. The monied interest has a hold on it.”

The latest YouTube clip is another documentation of our perplexing world. Whether you believe in UFOs or not, the clip certainly raises some serious questions.

This article (UFO Sighting Documented in Paris, Similar to Those in Australia, China [Video]) is a free and open source. You have permission to republish this article under a Creative Commons license with attribution to the author AnonWatcher and AnonHQ.com.