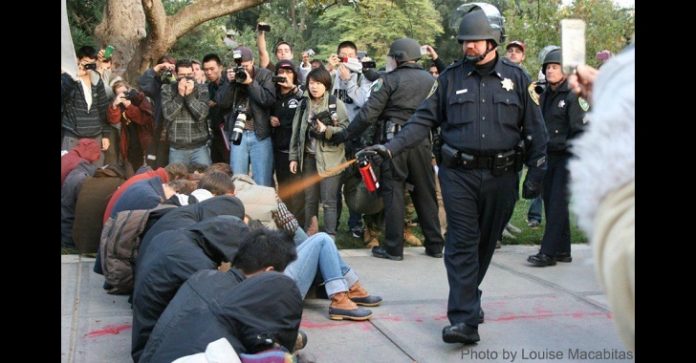 One of the most widely used forms of information suppression is legal and online. It’s known as negative SEO (search engine optimization), and companies use it to bury negative publicity. The most recent and glaring example of this technique can be seen in efforts by UC Davis to conceal search results related to theinfamous brutal pepper spraying of protesting students at the University of California campus in 2011.

Evidently, UC Davis is upset the truth went viral — and spent $175,000 burying the thousands of negative stories that resulted from the incident. They hired a PR firm with the stated objective to “expedite the eradication of references to the pepper spraying incident in search results on Google for the university and the Chancellor.”

According to AJ+, the the firm “ran deep analytics on search term patterns.” They then saturated the web with positive stories, optimizing them to bury the negative stories.

Link placement has been used to bury controversial or negative stories across a range of commercial enterprises. It is an entire industry of subterfuge —  a legal and ubiquitous form of information suppression that remains largely unseen by the public eye.

With examples like UC Davis’ information suppression, it is important to understand that while the Internet can be a democratizing tool for social enlightenment and grassroots activism, it is also prone to the same forms of oppression as the offline world. The same companies, organizations, and agencies who use money, cronyism and corruption to suppress the truth in real life use their vast wealth and corporatist connections to manipulate the flow of information online, as well.

The full complicity of Google in this widespread practice remains unclear. The search engine giant can claim this form of SEO is legal, which is true (even black-hat SEO is usually legal). They can also claim they are not the ones engaging in the suppression — that it’s independent firms who are gaming Google’s search algorithm. However, we already know of the collusion between Google and the federal government. Is it, perhaps, a bit naive to think there is not rampant collusion between billion dollar brands and the company that controls the vast majority of what we see online?

Now that news of UC Davis’ attempted suppression has gotten out, the pepper spray incident is receivingrenewed interest from the internet thanks to the “Streisand effect.” Do free speech a favor: help win the censorship battle with UC Davis by spreading this information around the internet.

This article (UC Davis Spent $175,000 Trying to Hide This from You. Don’t Let Them) is free and open source. You have permission to republish this article under a Creative Commons license with attribution to Jake Anderson andtheAntiMedia.org. Anti-Media Radio airs weeknights at 11pm Eastern/8pm Pacific. If you spot a typo, email[email protected].