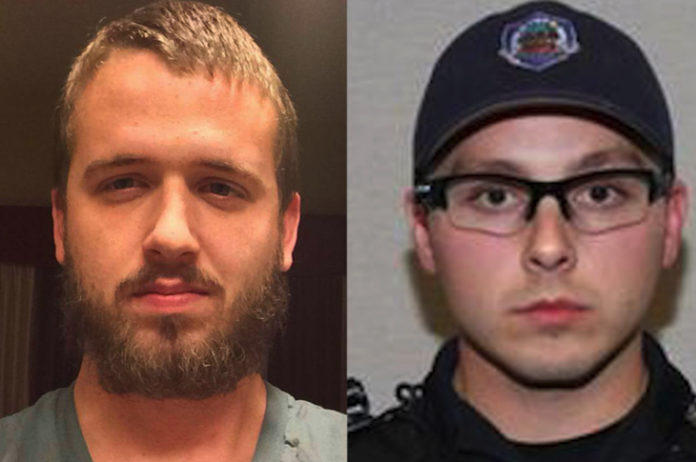 After crying and begging for the police not to shoot him as he crawled toward them with his hands up, Daniel Shaver was fatally shot by Officer Philip Brailsford. The police were responding to a complaint that Shaver was holding a rifle outside of his hotel room, which turned out to be a pellet gun, even though Shaver did not even have that gun on him.

Police responded to an emergency call just after 9 PM that claimed that someone was pointing a rifle out of their fifth-story window, which turned out to be Shaver showing off his pellet gun to new friends that were in the room with him.

The friends, a man and a woman who were attending a conference for work at the hotel, met Shaver and went up to his room to engage in a night of drinking. The woman reportedly asked about a case in Shaver’s room, wondering if it was a musical instrument. Instead, Shaver opened the case to reveal a pellet gun and a dead sparrow. He told the two that he worked for Walmart and was hired to kill the birds in the stores.

Shaver and the other man began to play with the rifle and were eventually pointing it out the window. The woman said that she told them to stop because she was afraid that they might accidentally hurt someone because they had been drinking. Various witnesses reported that Shaver was extremely intoxicated before the police arrived.

At the time of the officer’s arrival, Shaver and the woman were in the hotel room and the man had stepped out to call his wife. Police were able to safely guide the woman out of the room, but Shaver was still crawling slowly while crying and begging the police to “Please don’t shoot!”

Shaver was cooperative, but many suspect that his level of intoxication prevented him from understanding all of the commands he was being given. He had been instructed to crawl towards police with his hands in the air, which he did until he was close to the officer. The police told Shaver that if he reached for his back, he would be shot.

As he neared the officer, his right hand suddenly dropped to his waistline, although the officer himself claims he reached towards “the small of his back,” and that’s when Officer Brailsford fatally fired his service weapon, which has the words “You’re f*cked” etched on it. Many believe that Shaver was simply reaching to pull up his shorts, as they were sagging. Shaver was declared dead at the scene.

In the wake of the shooting, Shaver’s widow, Laney Sweet, has expressed her frustration at the slowness with which information about the incident has been released. More than two months after Shaver died, details surrounding his death have not been made clear, including why the police have yet to release the body cam footage from Officer Brailsford.

Officer Brailsford has since been fired from the Mesa Police Department and has been charged with second-degree murder. The county attorney stated that Brailsford was “manifesting an extreme indifference to human life recklessly causing the death of another.”

Do you think Brailsford was right to shoot Shaver after he dropped his right hand down? Should the police release the body cam footage? Comment your thoughts below and share this article!

This article (Unarmed Man Yells “Please Don’t Shoot” Before Being Killed By Police, Officer Fired And Charged With Murder) is free and open source. You have permission to republish this article under a Creative Commons license with attribution to the author and TrueActivist.com