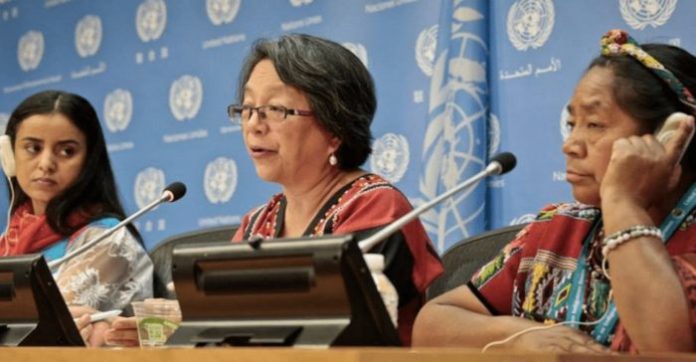 The construction of the Dakota Access Pipeline (DAPL) has incurred the wrath Native Americans, as well as human rights activists around the world.

As protest against the DAPL continues unabated, many Native American tribes from Wyoming, Colorado, and even as far as Oklahoma have joined the Standing Rock Sioux Tribe in North Dakota to halt the construction. When Chief Archambault II was freed in August, as a law abiding citizen, he took the matter to the international arena. He traveled to Switzerland to petition the world governing body, the United Nations to intervene and halt the construction of the DAPL, which hugely impact negatively on the lands of Natives in the United States.

Chief Archambault II officially invited the United Nations Special Rapporteur on the Rights of Indigenous Peoples, Victoria Tauli-Corpuz, to visit the construction zone, in order to see the damage caused by the pipeline.

In Geneva, Chief Archambault II told the United Nations Human Rights Commission: “I am here because oil companies are causing the deliberate destruction of our sacred places and burials. Dakota Access wants to build an oil pipeline under the river that is the source of our nation’s drinking water. This pipeline threatens our communities, the river and the earth. Our nation is working to protect our waters and our sacred places for the benefit of our children not yet born.” However, the United Nations has finally spoken on the issue. The body took time to conduct its own investigations after being petitioned by the Standing Rock Sioux Tribe. According to the United Nations, the United States should immediately halt the construction of the DAPL, and take new steps to peacefully address the concerns of Natives.

The statement was made by Victoria Tauli-Corpus, under the mandate of the Office of the United Nations High Commissioner for Human Rights. The statement said the Natives were totally excluded from the project, and that has caused the misunderstanding.

“The tribe was denied access to information and excluded from consultations at the planning stage of the project and environmental assessments failed to disclose the presence and proximity of the Standing Rock Sioux Reservation. The United States should, in accordance with its commitment to implement the Declaration on the Rights on Indigenous Peoples, consult with the affected communities in good faith and ensure their free, and informed consent prior to the approval of any project affecting their lands, particularly in connection with extractive resource industries”, Victoria Tauli-Corpus wrote in the statement. Victoria Tauli-Corpus further said the Natives should be included in a new negotiation which will ensure the full protection of their rights to their lands. She wrote: “I urge the United States Government to undertake a thorough review of its compliance with international standards regarding the obligation to consult with indigenous peoples and obtain their free and informed consent. The statutory framework should be amended to include provisions to that effect and it is important that the US Environmental Protection Agency and the US Advisory Council on Historic Preservation participate in the review of legislation.” On the harassments and intimidations of peaceful porters by security officers, Victoria Tauli-Corpus said the United States should take immediate steps to protect the Natives’ right to assembly, as well as ensuring their full safety during such assemblies at the construction zone.