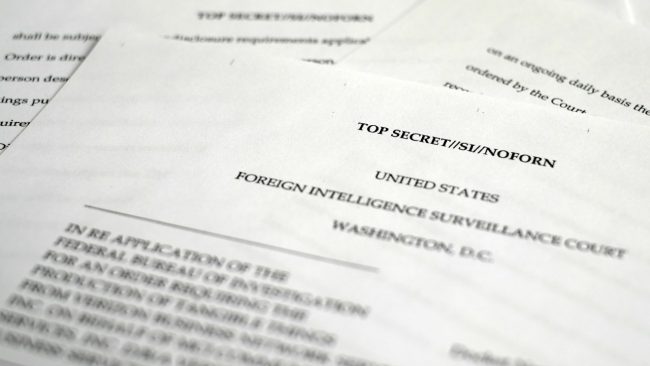 Recently the United States House of Representatives approved landmark legislation which actually requires law enforcement officials to obtain court approved warrants before accessing information in emails and cloud storage. Last year Congress was in the headlines for striping powers from the NSA, mainly the authority to blindly bulk collect data from United States citizens- requiring the agency to get warrants first.

Now, according to Reuters News, a new statistic has been released which only goes to show how meaningless all of these new laws and procedures actually are. You see, the United States government actually has its own specialized court for dealing with surveillance and this court just happened to approve 100% of requests sent to them over the last two years with little or no investigation into any individual request.

The court is called the US Foreign Surveillance Intelligence Court (FISC or the FISA Court) and was established by Congress in 1978 with the intent of “entertaining applications submitted by the United States Government for approval of electronic surveillance, physical search, and other investigative actions for foreign intelligence purposes.” Statistics reveal that in 2015 alone the court was presented with 1,457 “surveillance requests” (hacking requests/data collection requests) related to foreign citizens and did not deny a single application. If you think this may be an anomaly, you would be wrong. In 2014 the NSA and FBI, the two primary organizations whom apply with the court, were also granted 100% of requests. In fact since the court was established in 1978, only 11 applications out of 33,942 have been denied- a historical success rate of 99.96%.

Furthermore the memo’s released by Reuters indicate that the FBI asked for 48,642 National Security Letter (NSL) in 2015 alone – all requests were granted. A National Security Letter is a “request for information form a third party that is issued by the FBI or by other government agencies with authority to conduct national security investigations” in regard to specific individuals. These letters grant the FBI the authority to collect “subscriber information; toll billing records; internet service provider (ISP) login records; electronic communication transaction records; financial records; money transfers; credit records, and other consumer identifying information” on any citizen foreign or domestic they choose to investigate.

As for people living inside the US, in 2015, the FBI made 9,418 full national security letter requests for recent legal immigrants and US citizens. The FBI also made additional requests for partial NSL’s to collect “subscriber information” on 3,746 different US citizens. The memos also note that the US government made and additional 142 requests to obtain business records – Once again every single one of these requests were granted by the court.

The fact that the NSA and FBI have their own private court “legally approving” of otherwise illegal and immoral actions is a complete joke. The court only serves to give the illusion that our federal government actually operates under some sort of check and balances system. But a federal courts which historically grants 99.96% of federal requests with no independent investigation into these requests only show how much of a lie the idea of checks and balances really is. The fact of the matter is that the United States government is free to do whatever it wants whenever it wants with no accountability or over-site whatsoever. Even the actions these agencies perform are shielded under “national security”, which means not even our elected officials are allowed to see what they are doing. The NSA, CIA and FBI are beasts which can not be contained.

This article (US Government Has Its Own Court Which Grants 100% of Surveillance Requests) is free and open source. You have permission to republish this article using a creative commons license with attribution to the author and AnonHQ. Join the conversations at www.anonboards.com