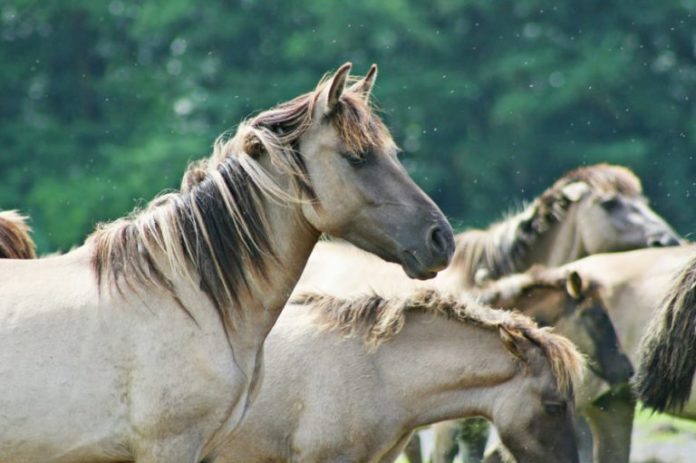 What is the most humane and creative way to unload the unwanted and aging wild horses?  Euthanasia. The Bureau of Land Management’s National Wild Horse and Burro Advisory Board has decided to slaughter 45,000 unadopted wild horses, currently held captive (horses have been left out in pens in 100-degree heat with no shelter to protect them) in their short and long term government holding facilities, throughout the United States.

The BLM has been rounding-up and removing wild horses and burros from their natural habitat over the last 20 years, so that privately-owned cattle could graze on the land for profit. Now that the unsustainable financial burden of maintaining its primary management strategy – to keep the wild horses and burros alive in overcrowded holding facilities – is proving to be a bane (the BLM spent an estimated $49 million on the horses last year), the Board voted to condemn wild horses and burros to death. The decision hasn’t been particularly well received. Criticizing the Board for not exercising the alternative fertility control programs to slow down horses’ and burros’ population growth, Holly Hazard, senior vice president of Programs & Innovations at Humane Society of the United States, said in a statement:

“The decision of the BLM advisory board to recommend the destruction of the 45,000 wild horses currently in holding facilities is a complete abdication of responsibility for their care. The agency would not be in this situation but for their long-term mismanagement. Alternatives to this proposal have been ignored for over 20 years. The HSUS stands ready to implement these alternatives at any time.”

In Defense of Animals, an animal rights activists group, has slammed the decision, calling it “the biggest horse slaughter in history” and “a wild horse genocide” that will wipe out more than half of all wild horses remaining in the U.S., using tax payers’ money. Dr Marilyn Kroplick, IDA’s president, noted:

“This is the final straw – the public will not accept the government’s relentless persecution wild horses anymore. We call on the government to immediately halt the mass horse slaughter plans and revoke the BLM’s right to manage public lands on the basis of the agency’s gross ineptitude, squandering of public funds, and failure to meet the basic requirements of the wild horse protection Act.

“The BLM’s proposal flies in the face of every single protection mustangs are afforded under the Act and is a gross travesty of justice for these horses who have been ripped from their homes, torn from their families and placed in pens for their lifetimes, only to now receive a death sentence.”

I Want My Tax Money to Be Used to Protect Wild Horses on Public Lands, NOT Support Welfare Ranchers! @BLMNational pic.twitter.com/m6PJrpJEtJ

According to the BLM, there are about 67,000 wild horses and burros roaming on 27 million acres of federal land in 10 states. Without management, their population doubles in size every four years. So, as a result, the beef industry demands that the agency kill all 45,000 wild horses and burros, and round-up the majority of the rest for sterilization – to make room for more cattle farms. In June, California Congressman Tom McClintock (R) told the House Subcommittee on Federal Lands how wild horses are overpopulated and eating up all the grass that could be used to support more cattle.

“Nature is brutal in dealing with overpopulation. It manages it by disease and starvation. A much more humane way to deal with the “problem” is slaughter and surgical sterilization. It’s not just the horses that are threatened by their recent “population explosion”. It’s agricultural development … and the human population that depends on crops and livestock taken from the same land. The BLM says the cost of caring for a horse in a coral is nearly $50,000 over the lifetime of each animal. That equates to over a billion dollars based on the current number being held.”

However, Ginger Kathrens, volunteer executive director of The Cloud Foundation & the only one who voted against the brutal cull, argued that:

“Not only are wild horses not “overpopulated”, they are managed at levels “far below the population required for genetic viability” and are in danger of disappearing for good. Wild horses live on only 11% of BLM-managed land, and in most cases they share the land with privately owned cattle. Livestock outnumber horses and burros 47 to 1, and livestock are allocated 82% of the forage. Who’s starving out who again?”

You can urge the BLM advisory board to reconsider its proposed slaughter by writing to them at [email protected] or sign petitions here, here or here to stop the genocide.

This article (US Government to Slaughter 45,000 Wild Horses to Make Room for Cattle Ranchers) is a free and open source. You have permission to republish this article under a Creative Commons license with attribution to the author and AnonHQ.com.