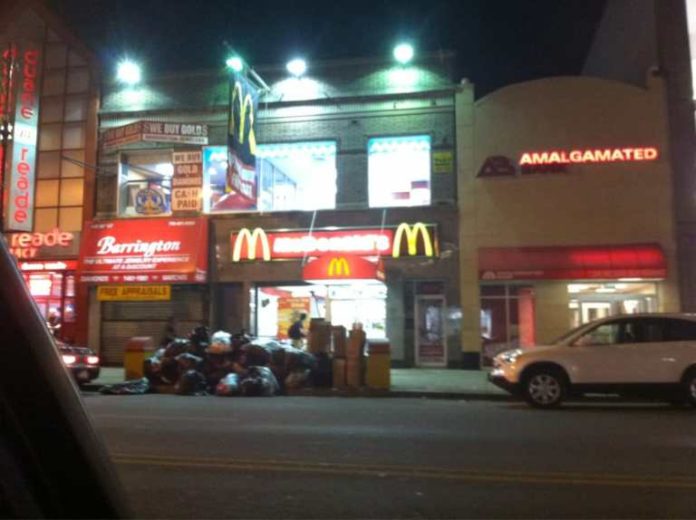 A US Deputy Marshall was arrested this month after pulling a gun on a McDonald’s cashier. Charles Brown, a deputy with the Marshall service, was drunk and belligerent when he pulled his gun and waved it at a crowd of angry onlookers before pointing it at the frightened cashier.

According to reports, Brown entered the Brooklyn New York McDonald’s around 1:20 in the morning. Some conflicting reports have come out, however, one thing could be agreed upon. Brown pulled his gun and pointed it at the clerk over what was described as his anger over the length of the line. Some reports claimed that he pointed the gun at the crowd, others say he was engaged in an argument and left before returning with the gun. Either way, Brown ordered food and then left without taking it. He was found passed out nearby with a semi-automatic handgun in his waistband.

Brown was arrested for menacing, harassment and firearms violations. According to the New York Post, Brown lived in an “upscale” Bay Ridge home but “was not available for comment.” He currently resides with his father, who also declined to comment. The employee involved in the incident, Joanna Diaz, was scheduled to open the restaurant the following day but never showed up to work. Having your life threatened by one of the alleged “good guys” would be enough to make anyone skip out on work.

According to one of the restaurant’s customers, identified as Heather Polamis, “You can’t go anywhere today without something happening. [US Marshalls] are under a lot of pressure. They’re under a lot of stress. They risk their lives every day.” She defended the officer by stating he probably just “snapped.” Polamis’ statement shows the level of conditioning the general public undergoes. Pulling a gun on a cashier makes you a criminal, no matter how much “stress” you’re under.

This is the second time this year that a law enforcement officer has pulled a gun on a fast food worker. In July, a Santa Clara California cop thought it a good idea to drive through the Jack-In-The-Box drive-thru, drunk. When the cashier took too long making his burger, Officer Benjamin Lee pulled his firearm and threatened the cashier. Cell phone video surfaced of the incident, showing a half dozen SWAT officers hold him at gunpoint and order him away from his vehicle. Lee was arrested for DUI and assault with a weapon.

As Deputy Marshall Brown was found drunk in his vehicle, he should have also caught a DUI, however he received some blue privilege instead. Law enforcement continually demonstrates that they’re the ones that society needs to fear. Whether or not this will impact on Brown’s career in law enforcement is yet to be determined.

This article (US Marshall Arrested for Pulling Gun on McDonald’s Cashier) is a free and open source. You have permission to republish this article under a Creative Commons license with attribution to the author and AnonHQ.com.