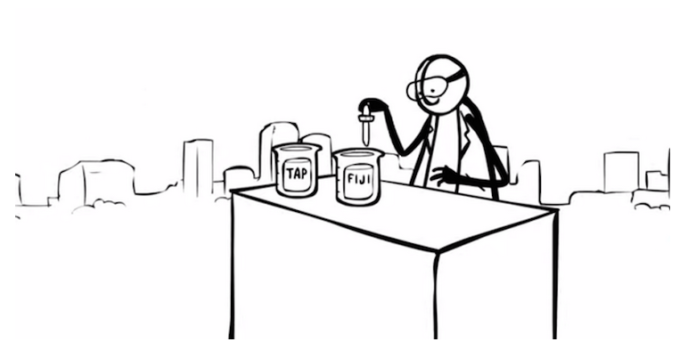 This video, created by ‘The Story of Stuff Project’ was made to expose the truth behind the bottled water industry. After watching the video many of you are guaranteed to never purchase or drink bottled water again.

This shocking calculation was made by a Business Insider column, it was noted in the piece that in the United States, two-thirds of the bottled water sold are 16.9-ounce bottles. This means that per gallon of bottled water it costs around $7.50, which is 2,000 times the price of a tap water equivalent. Fiji Water ran an ad campaign which had clear intentions to debase the city of Cleveland’s water supply. In retaliation the city decided to test the brands water and compare it to their own, it was found that Fiji Water contained levels of arsenic, a semi-metal element which is also used in wood preservatives, paints and metals, whilst the city’s tap water has no measurable quantity of the element.

3) The amount of bottled water purchased every week in the U.S. could circle the globe five times. This astounding fact was confirmed by the fact checkers at UpWorthy:

“According to the video, ‘People in the U.S. buy more than half a billion bottles of water every week.’ National Geographic says for 2011, bottled water sales hit 9.1 billion gallons (roughly 34 billion liters).

A ‘typical’ water bottle is a half-liter, so that’s about 68 billion bottles per year. Divided by 52 weeks would be a little over 1 billion bottles of water sold per week in the U.S. Because that’s based on a smaller ‘typical’ bottle size, it seems reasonable that a half billion bottles a week could be accurate.

The Earth is about 131.5 million feet around, so yep, half a billion bottles of varying sizes strung end-to-end could circle the Earth five times.”

4) Corporations are conning us into buying bottled water. Through a concept known as manufactured demand, corporations have made a multibillion-dollar industry out of selling us something which was already readily available and inexpensive. To do this, the corporations bombarded us with claims that tap water is unhealthy, and have deceptively used nature inspired imagery on their product labels.

All of these claims have thus far been discredited; research has shown that anywhere up to 45% of bottled water is simply filtered tap water.

5) Bottled water is not ‘environmentally responsible’ It requires an abundance of oil to make plastic bottles, and even more to ship them around the world. In fact, in the U.S alone, the amount of oil required to make just one years supply of plastic bottles, could fuel a million cars during the same period.

We then proceed to disposed of 80% of these bottles into landfills or incinerators, which pollute the environment and public water supplies, ultimately giving the corporations more leverage. The remainder of the bottles are shipped to other countries, where there are no environmental and labor protections, which forces them to live surrounded by our waste.

Disturbingly, every minute a child dies from a waterborn disease, meaning whist you have been reading this article and watching the video at least 10 children have died. Everyone should be entitled to a clean water supply, yet shamefully we waste ours. Instead we opt for bottled water, even though it likely has no additional nutritional value, pollutes our planet, and makes deceptive and greedy corporations billions of dollars annually.